I'm sitting in my living room, gazing at my Christmas tree and holiday decorations (that have taken me three days to put up and I'm not done yet) and thinking about Christmases past. I'm thinking about how my preparations for the holiday season are very different from that of my ancestors and yet in some ways they are the same.

In the book, The Peasants by Wladyslaw Reymont, he describes cleaning the house as the beginning of the preparations for Christmas. Evidently this was done early on the morning of Christmas Eve.

Since daybreak on Christmas Eve, the whole village was in a state of feverish excitement and bustling activity... Every cabin - Macheck's, Simon's, the Voyt's, and who can say how many more? - was now being aired and scoured and scrubbed, and the rooms, the passages, and even the snow in front of the huts, were strewn with fresh pine-needles; in some dwelling the hearths, grown black and dingy, had also been withwashed.

The peasants in Poland in the 1800s, like all people in the old days, didn't devote a lot of time to cleaning. It may sound a little disgusting but times were different then. People spent most of their time doing what they had to do to survive... ranching, farming, smithing, cooking, making clothing, feeding babies, etc. A thorough cleaning was something that was done for special occasions.

Reymont references "whitewashing" the walls of the homestead. This was done in place of painting the walls. These were relatively poor people who lived in buildings with dirt floors. Most often the homesteads housed people in one or two rooms on one side of the building and the barn animals on the other side with an access door between them. It was actually a very efficient set up if a family had only a relatively few animals, which tended to be the case. One stove heated the house and could also take the chill off for the animals at the same time. It also made it easier to get to the animals first thing in the morning to milk them and feed them, especially when brutal winds and heavy snow moved in over night. 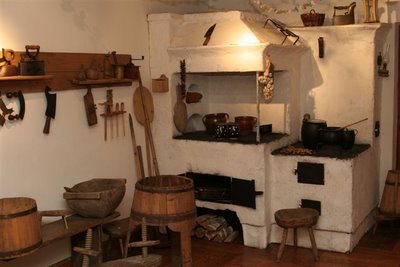 From the Tarnow.pl web site, a photo of a display from the Ethnographic Museum which shows the white washed walls, wood stove for heating and cooking, and some cooking utensils. 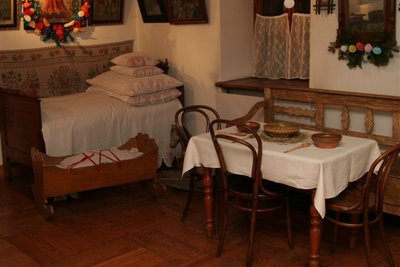 Also from the Tarnow.pl web site, a photo from the Ethnographic Museum. This display shows how one room is used for both eating and sleeping. The wood floor was not common in peasant homes. Most had dirt floors. 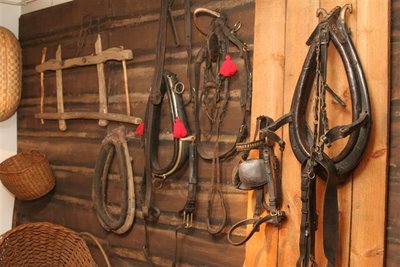 Also from the Tarnow.pl web site, this photo shows the "other side" of the house where the animals would have been housed.

It looks kind of cozy but I'm sure when periods of bad weather came along it would have felt like the walls were closing in. When I look at these pictures I can imagine my ancestors cleaning homesteads just like these in preparation for the Christmas holiday. I will make sure my own house is clean in preparation for Christmas too, but I think I'll pass on the whitewashing of the walls. And I'll be doing that cleaning a few days before Christmas, not the morning of Christmas Eve.

As a child, I remember my mom giving our house a good cleaning before we put up the Christmas tree and decorations. Perhaps that was a custom she learned from her mother who was born in Poland in late 1800s. Then again, my mom was one of those whose floor you could eat off of any day of the week. Perhaps I am looking for connections with the old country ways where their are none.

It's hard to see without looking at the larger image but the ornament in this photo is a peacock. It's a glass ornament made in Poland with an actual peacock feather for a tail. I found a set of 4 of these ornaments on a clearance table at a Polish import store for $10. The Polish people are fond of birds and you'll find images of them throughout their folk art. Most commonly you'll see roosters, doves, and eagles (crest of Poland) but peacocks are not uncommon either.