The following is excerpted from Poles in Michigan, Vol. 1

Posen, Part 2 of 2
History of an Old Polish Settlement in Northern Michigan
By Dr. Stephen Wloszczewski

It is considerably more difficult to establish the date of the first Polish arrival in Posen. We do not even have information as to the date of the hacking of Posen from Presque Isle Township. The one certain piece of information is that Lawrence Kowalski became a member of the County Board of Supervisors, representing Presque Isle Township, in 1871. Successively, in 1873, Lawrence Przybyla became a member of this administrative body, also as a representative of Presque Isle Township. Posen is mentioned for the first time in the minutes of the County Board meetings of 1875, when it is clearly stated that the County was formed out of Presque Isle Posen, Moltke, Belknap, and Rogers Township. Logically the following conclusion may be reached. There was not yet the town of Posen in 1871, but there were Polish settlers in Presque Isle. They must have been there a long time since they enjoyed such influence and esteem among the body of German and Scotch settlers that two of them - Kowalski and Przybyla - were elected as supervisors in 1872 and 1873.

Since we are speaking of Posen as a township in 1875, there must have been at least a number of Polish settlers living there before 1870, since it is known that only after five years residence was it possible for homesteaders to become property owners with the right to vote at election to the governing bodies.

The data collected by a former priest of St. Casimer's of Posen, Father Casimir Szypera, tell another story. In his small, but very valuable history of the parish of St. Casimir's printed on mimeograph, Father Casimir Szypera holds that the first Polish settler came to those parts in August of 1870. His name was Lawrence Kowalski. According to this author the second settler was Matthias Szymanski who arrived in November, 1870. After them came Andrew Wyrembaiski, Francis Rozer, Jacob Strzelecki, Valentine Losinski, , John Bronikowski, Lewandowski, Muszynski, Przybyla, Dojas, and Stosik.

We, however, doubt Fr. Szypera's dates. He collected them from the oldest settlers, from persons who repeated and distorted that which was told them, in their time, by their fathers who might easily err about the chronology of events.

There is one other point which proves that Posen was wrested from Presque Isle township in 1874; that the Polish settlement existed here previously, even before 1870; and that the first Polish purchasers of homesteads came even earlier - perhaps at the beginning of the 1860's.

Toward the end of 1860 there resided in Chicago a Polish Jesuit missionary, Fr. Francis Szulak. Frequently, when it was brought to their notice that Poles were beginning to congregate in the sphere of any parish, American bishops turned to him, requesting him to come with a Mission. There already must have been a large number of Poles engaged in the activities of Presque Isle since Fr. Szulak came there in 1874. It is probable that he was then able to induce a group of fathers and sons to separate themselves territorially from the rest of the County and present a petition to the County Board of Supervisors - just as he had done in Buffalo, in 1874. Perhaps he even suggested the name, Posen, to them.

There is a complete silence about all this in the county records of 1874. In those days the legality of the first county elections, of 1871, was a matter of dispute among the people. Everything was suspended. It appears that there was no County administration, no records kept, correspondence was not opened. But in 1875, when the situation was clarified, the meetings of the County Supervisors were again scrupulously recorded. In the first record we read: "The County was organized with the townships of Presque Isle, Posen, Belknap, Moltke, and Rogers..."

The Poles settled in cities, not because it was so convenient for them, but because they journeyed here without any money. Persons, without money, and, in addition, not traveling in a group as did the Norwegians or Italians, are not suitable as settlers no matter how great their love for the occupation of farming. But Poles were drawn to their land and at the first opportunity moved out to farms.

This is a very characteristic and very encouraging phenomenon. When the descendants of the farm settlers who came from England, Scotland, Germany, or Ireland, withdraw after a certain time from their farms and moved to cities, the descendants of Poles, migrated from the cities to the villages. Today Michigan is full of farmers, closely bound to the soil. A considerable portion of them are of Polish descend. When money was at their disposal it was easy for people to settle on the land though it might be virgin and even a thick jungle. It was more difficult to rear the succeeding generations to love and feel attachment toward the occupation of farming. The Poles, the Michigan Poles, were able to do just that.

The farmers of Presque Isle and Montmorency Counties, who grow Chippewa potatoes in record quantities, and merchants of Hiliman, Rogers City and Alpena are the descendants of these early settlers. In addition to farming and commerce, they are famous fisherman, hunters and woodsman. THE EDITORS

All of the lower peninsula of Michigan constitutes Circuit X of
P. N. A., and now includes over 30,000 members. Currently Mrs.
Josephine Wolas is Commissioner of the Women's Division and
Frank Odrobina is Commissioner. 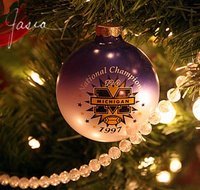 I've been a fan of Michigan football for a long time (since back in the early 1970s). While Michigan traditionally fields an outstanding football team year in and year out they haven't won many National Championships. I treasure this ornament because it represents one of those great years when they were "the best".
Technorati Tags:Polish|Michigan|history|Posen|Wloszczewski|Presque Isle|Alpena|Kowalski|Przybyla|Szypera|Szymanski|Wyrembaiski|
Rozer|Strzelecki|Bronikowski|Lewandowski|Muszynski|Przybyla|
Dojas|Stosik|Szulak|Wolas|Odrobina|U of M|Creative Gene|Jasia
Posted by Jasia at 9:06 AM