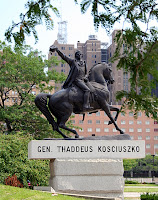 At ceremonies held at the Presbyterian Church of St. Albans, the Polish AmericanCongress presented a reproduction of General Kosciuszko’'s last will and testament to the United for Progress Democratic Club of Queens, New York...

...Before Kosciuszko left the United States in 1798, he directed the executor of his will, Thomas Jefferson, to distribute all his property he was leaving behind for “purchasing” black slaves and “giving them liberty in my name.”

In describing Kosciuszko, Jefferson stated, “he is as pure a son of Liberty as I have ever known and of that liberty which is to go to all and not to the few or rich alone.”

The PAC’s Milewski was a guest speaker at the Black History Month commemoration. “Kosciuszko is an example of the true Polish spirit,” he said.

Kosciuszko is remembered in Detroit as well with a 22 foot bronze statue that stands at the corner of Third Street and Michigan Avenue (pictured above). More about the Kosciuszko statue in Detroit.
Posted by Jasia at 7:59 AM