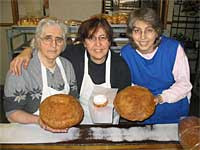 From Detroit's Metro Times, we have an article called The Big One by Michael Jackman. It's about creating the biggest paczek (singular form of paczki) in Michigan... a challenge issued to the owners of the Martha Washington Bakery by Hamtramck mayor Karen Majewski.

After the call came in, the patriarch of the family, Petar Petrovic, began experimenting the same night. On and off, the family has been working feverishly in the run-up to the Paczki Day ceremony. Clearly, it's a matter of family honor...

...The first attempt was 16 inches in diameter, but weighed more than five pounds because it absorbed too much oil. "It was oily, crumbly and flat, and it wasn't done inside. It just won't fry at that size."

The second attempt had better color, and weighed in at 3 pounds, 14 ounces. There was a minor tragedy when half of it fell in.

By Feb. 2, Petrovic's creations were nearing perfection. He made three paczkis, all weighing about 27 ounces, light enough to eat, with good texture, and, at more than 9 inches in diameter, big enough to fit the bill. But, at press time, the family is still preparing to make one final, unbeatable batch in time for Hamtramck's VIPs. If anybody can do it, they can.

At 11 a.m. on the morning of Feb. 17, Michigan's largest paczek will be presented at the corner of Holbrook and Joseph Campau. The event will kick off a weekend of celebrations in and around Hamtramck.

Is your mouth watering yet?
Posted by Jasia at 12:55 PM