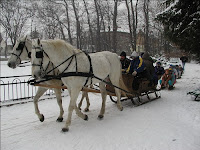 I want to be a kid again, and play in the snow in a park in Poland.

Or better yet, I want to be able to take pictures of kids playing in the snow in a park in Poland, as well as Pawel Topolski, my favorite Polish photographer... from the Tarnow.pl web site.

Winter looks like so much more fun the way Pawel sees it.

Last weekend was the Motown Winter Blast here in Detroit. I wanted to go but it was too cold. That's the problem with winter, it's cold. Even if I'd gone and taken pictures of kids having fun playing in the snow in a park in Detroit my pictures wouldn't have turned out as well as Pawel's. Poland's snow looks like more fun than our snow. It doesn't look as cold either. 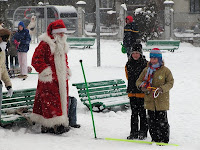 Why is it the snow is always whiter on the other side of the pond. Could it be that it is just my perspective on things that's at issue here? It couldn't be that Pawel is a better photographer than me, could it?

I wonder if he's ever done any pinhole photography?
Posted by Jasia at 2:44 PM