Did Your Granny Wear a Bra?

We're coming up on the midpoint of National Women's History Month (and the Carnival of Genealogy deadline is tomorrow, March 15th, for those of you who'd still like to submit an article ;-). I mentioned in a previous post that I intended to write some articles looking at the world through the eyes of our female ancestors. Most of the women on our family trees were ordinary women who led ordinary lives. So the things that filled their world and their days were for the most part ordinary things. Like underwear. You know, lingerie. Now don't go all giggly on me. This is a serious look at the history of women's under things :-O

So, what do you think? Did your granny wear a bra? Maybe yes, maybe no. It depends when your granny was alive. From Wikipedia...

In 1913, a New York socialite named Mary Phelps Jacob changed women's fashion forever when she cobbled the first brassiere together by tying two handkerchiefs together with ribbon. Jacob's original intention was to cover the whalebone sticking out of her corset, which was visible through her sheer dress. Jacob began making brassieres for her family and friends, and word of mouth soon spread about the garment. By 1914, Jacob had a patent for her design and was marketing it throughout the United States. Although women had worn brassiere-like garments years past, Jacob's was the first to be successfully marketed and widely adopted.

Just prior to 1914, granny was most likely wearing something like the garments pictured above (from a 1913 ladies underwear advertisement). There's a nice description of the history of both men's and women's undergarments at Wikipedia.

Have you ever given any thought to how women's undergarments influenced the way they were perceived and treated by society?

Of all the various forms of female underwear, the corset in its various guises has probably played the largest role in keeping women immobilized over the centuries. They restricted movement, made breathing shallow and difficult (reducing lung capacity by almost 2/3) thus giving women the reputation of being “delicate flowers” who could not exert themselves very far without fainting. Corsets were also used as a metaphor for virtue, despite the fact that courtesans were as tightly laced as any other woman. It was thought that an ungirdled woman might be wanton or “loose”.

For more on this topic visit womenshistory.org.au. It's very interesting reading! 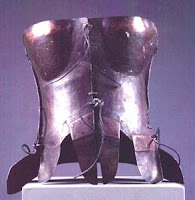 If you'd prefer a lovely pictorial history of women's lingerie, check out the wonderful collection presented on the Kent State University Museum web site. It's interesting to look at the pictures and imagine great-great-great grandma wearing something like this metal corset, from the 1700s. Morals be damned... it wouldn't take much to persuade me out of this sucker ;-) It gives you an all new level of respect for those female ancestors of ours doesn't it?

If still photos aren't your thing and you're looking for an online video about the history of corsets you're in luck! Sort of. YouTube has one, unfortunately it's narrated in German. But hey, don't let that stop you from checking it out.

Did you ever wonder how women of yesteryear shopped for their lingerie? If so, you can satisfy your curiosity by checking out the 1915 Montgomery Ward Catalog. This particular edition featured winter undergarments for men and women. Take a look and see what granny might have worn under her dress in the cold weather months...

One garment in particular "stands out" in the history of women's underwear and that would be the crinoline. The crinoline is the garment that used to make the Southern Belle's dresses appear domed. There's a bit of history to this garment. From the Fashion-Era.com web site:

In the 1830s a linen material woven with horsehair called crinoline was first used for cloth petticoats. The word crinoline comes from the French for 'crin' and 'lin', meaning horsehair and linen respectively. This version of a petticoat was the original crinoline and later the name continued in use incorrectly, but universally for the caged or hooped underskirt frames. 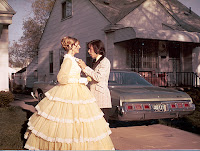 Now doesn't that sound itchy? It probably was. The more popular "cage crinoline" was devised in 1856. It didn't have any horsehair :-) And it wasn't particularly uncomfortable either. I can attest to that because I wore a modern day version of it under my senior prom dress (oh the secrets I do tell!).

So now you have a slightly different view of women's history, a view from the eyes of ordinary women. Next time you think about your female ancestors you can think of them on a whole different level... a level previously hidden to your eyes.
Posted by Jasia at 10:35 PM