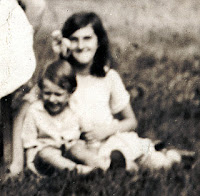 You know how they say every cloud has a silver lining? Well I'm a believer in that. I'm the person who looks for that silver lining when times get tough. Such was the case recently with the death of my mother. It's pretty hard to find the good in losing my mom but one good thing did come from her funeral. My mom's cousin, Charlotte, came to the funeral home the first night of the viewing. I never really knew Charlotte but I knew of her. I recalled my mom talking about her from time to time over the years. Their families spent a lot of time together in the "old days" when they were kids.

I was really pleased that Charlotte came to see my mom. There aren't many left from my mom's generation to do so. Mom outlived all of her friends and most of her family. I talked with Charlotte for quite a while and listened with rapt attention as she reminisced about the "old days" and the fun she and my mom used to have together when they were younger. The thought occurred to me that she might have an old picture of the two of them together, so I asked her about that. And much to my surprise and delight her reply was, "Oh heavens yes. I have a lot of pictures of our families together. My father was a photographer you know!"

BINGO! I felt like I'd just hit the jackpot!!!

My heart started racing I was so excited. I asked her to tell me more about the pictures and she explained that while her father was not a "professional" photographer who got paid for his pictures, photography was a serious hobby of his. His favorite subject matter was... family pictures. He had taken a lot of family pictures over the years and she had them in a a couple photo albums at home. I told her her about the fire at my parents' house back in 1958 and how my mom had lost most of her family pictures. I asked Charlotte if she would show me her photos and possibly consider allowing me to make copies of them. She didn't hesitate at all. She said she'd be happy to show me the pictures, just as soon as she figured out where she put them.

Oh, oh. That didn't sound good. I feared she would be well intentioned but not really make the effort to look for the pictures. I told her how much I wanted to see those pictures and begged her not to forget about me. She smiled at me and gave me a hug and said, "I won't forget about you. You have my promise that I will call you as soon as I find those pictures."

Dear Charlotte was good at her word. She phoned me at 10am the very next morning and excitedly told me that she'd found the photo albums and invited me to come see the pictures the day after my mom's funeral. It became the bright spot that I clung to over the next few days of my mom's viewing and funeral.

When the day to visit Charlotte finally came I found myself hoping that she hadn't been exaggerating. The minute she opened that first photo album I knew right away she hadn't been. I quickly turned on my audio recorder (iPod) and listened as she went page by page telling me who all the people were in the photos and where and approximately when they were taken. I was spell bound. Surprisingly enough, looking at the pictures didn't make me feel the least bit sad. These were all pictures of the "good" old days... the happy times that my mom had told me about when she was young and the family was doing well. It brought such joy to my heart to see the pictures that captured those good times. Charlotte was an absolute angel. She told me stories that had me laughing until I was shedding happy tears, something I wouldn't have thought I was capable of the day after my mother's funeral. She also gave me some good advice for dealing with my grief and seemed genuinely pleased to see me cheered up for at least a little while after my many days of sadness.

I spent two and a half hours with Charlotte that afternoon. As is so often the case when you're enjoying yourself, the time flew by. When it was time for me to leave, she handed me the albums and told me to go ahead and make my copies. I was elated. I left with the photos and spent the next couple of days scanning the pictures every chance I got. I returned them to Charlotte after a week and spent a little more time with her talking about the pictures and her family. This was the silver lining of the cloud that was my mother's death.

Photo: Lucy and her little cousin Charlotte at a family picnic on Belle Isle in Detroit, c. 1930.
Posted by Jasia at 8:18 PM