With the Independence Day holiday just around the corner, I think this is a good time to reflect on what being in America has meant to my family. (Oh yeah, and the Carnival of Genealogy is just around the corner too ;-) In order to do that, it makes sense to first examine what circumstances brought them here and then look at what became of the family after they immigrated.
My ancestors were, relatively speaking, late comers to America's shores. I can't claim any family members who sailed on the Mayflower, signed the Declaration of Independence, or fought in the Civil War. I am a 3rd generation/4th generation American. On my father's side, his maternal grandparents immigrated from Poland in 1881 making him a third generation American and me a 4th. My paternal grandfather immigrated in 1905 from Poland, and both of my maternal grandparents immigrated from Poland in 1912 and 1913. That makes me third generation American in those families. So in the scheme of things, we haven't been here all that long.
In the case of my paternal great grandparents, I suspect that their reason for coming to America had to do with both the poor economic conditions in Poland as well as family circumstances. My great grandfather was from a very poor village in Poland, he was the oldest of 9 children having 4 brothers and 4 sisters. In 1881 when he immigrated to America with his young wife and infant daughters, 3 of his 4 brothers were deceased and all 4 of his sisters were married. His father had died in 1873 and his mother had died in 1880. That left only him and his youngest brother, 17 years his junior, on the small family farm. He left Poland for the U.S. in May of 1881 and his younger brother stayed in Poland and married just 2 months later. It likely meant a better chance at economic survival for each of them to have parted ways when they did. The farm was not big enough to have supported both brothers' families. I have no pictures of my great grandparents to share with you.
My paternal grandfather immigrated to American in 1905. It's a little easier to talk about why he came to America because we know the story from family members still living in Poland. He too was the oldest child, having one brother and 3 sisters (a 4th died at birth). He was sent by his family to America to "get rich" and send money back to support the family. It didn't quite work out as planned... him getting rich that is. But he did earn enough to support his wife and 11 children in Detroit as well as sponsor one of his sisters so she too could come to America. The family back in Poland remained poor and struggled to get by. Here is a photo of the home of my grandfather's only brother, who lived his whole life in Poland and died in 1994. This photo was taken about 1980.

Unfortunately, I don't have a photo of my grandfather's house in Detroit but it was a two-family home that he owned in the heart of the west side Polish neighborhood of Detroit. His 11 children all attended Catholic school till the age of 12, except for his youngest child who graduated from high school. All of his children did well for themselves and of his 19 grandchildren, all but one graduated from high school (1 died at age 15), 7 graduated from college, and at least 4 are millionaires (so far ;-)
On my mother's side of the family we find a little different story. My maternal grandfather immigrated to America in 1912 just after his father's death. He too was the oldest son, having 10 younger siblings. He lived in the section of Poland that was occupied by Russia and controlled with an iron fist. My grandfather was being threatened by the Russians and from what we've been able to piece together he fled the country to avoid bringing down the wrath of the Russian army on himself and his family. He too sponsored one of his sisters so she could come to America in 1952. He started a baking company and did quite well for himself. 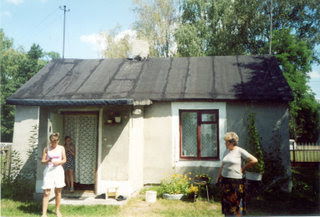 The pictures above and below were taken in 2003. These are the homes of my grandfather's family members back in Poland in his ancestral village. 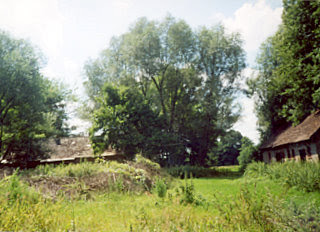 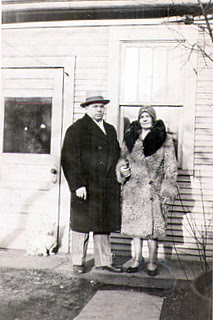 Here's a picture of my maternal grandmother and grandfather c. 1928... the well dressed immigrants, she in her fur coat and cloche, he in his wool top coat and fedora. I love this picture! This is a family and friends picnic on Belle Isle (Detroit) c. 1929. Notice the Model Ts in the background? One of them is my grandfather's. The family went on picnics almost every Sunday and Holiday in the summer (this picture could have been taken on the Fourth of July). Look how dressed up they all were for a picnic (still in their Sunday best after church no doubt).

My maternal grandmother was sent to America by her parents to get a good job and support the family back home in Poland. She immigrated to America in 1913 at the age of 19 and did just that. In addition to supporting the family in Poland for many years (from the earnings at the bakery), she sent for and sponsored 2 of her sisters so they could come to America for a better life as well. Grandmother was the second oldest of 6 children with one older sister, 2 younger brothers, and 2 younger sisters. She and my grandfather had 4 children, all graduated from high school, and 6 grandchildren, all 6 graduated from high school, 4 graduated from college, and at least 1 is a millionaire. 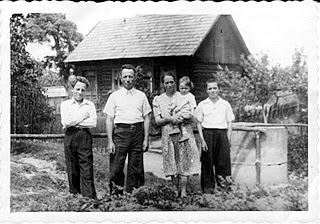 Here's my grandmother's youngest sister and her family in front of their home in Poland c. 1940. This was the only one of my grandmother's sisters who didn't immigrate to America.
So to summarize, support for the family members back in Poland was the motive for 2 of my grandparents to come to America. One came for safety reasons, and my great grandparents probably came for their own economic reasons. Life in America provided my ancestors with the safety and economic opportunities they sought. Given the political and economic oppression that Poland suffered during and after WWI and WWII, I think it's safe to say that those who came to America ended up much better off financially than their family members who stayed in Poland and certainly they didn't need to live their lives in fear for their own safety.

America means a lot of things to a lot of people. For my ancestors America meant not going hungry, economic support for family back in Poland, and safety from oppressors. For me America means so much more than economic salvation and a safe haven to live. It means peace (in the homeland) and prosperity, freedom and opportunity, pride and strength. I am fortunate and blessed to be living my life in America. And on this Independence Day I will not only give thanks to all those who fought to make this country the democracy it is today but to my grandparents and great grandparents for having the courage to leave everything and everyone they knew behind to start a new life here. I'm proud to call America my home and I can't imagine living anywhere else.
Posted by Jasia at 10:50 AM