Freedom Rocks! At least in my home town it does. I got a new camera (upgraded from a Canon Rebel XT to an XTi) and I needed somewhere to go on a photo shoot to try it out. The weather forecast for southeast Michigan was drippy with a chance of severe drippy. So I needed to find some place indoors. I was also hoping to photograph something "all American" given that it is Independence Day and all.

It just so happens that a new exhibit just opened at the Henry Ford Museum in Dearborn (home town of Henry Ford, and Jasia ;-) . The exhibit is called, Rock Stars' Cars & Guitars and it features just what it says. I checked out the HF Museum web site and discovered that they've created a separate web site just for this exhibit. It's pretty cool and it has some great stuff including an audio interview with Bob Seger, my favorite rock star (did you know he was born in Dearborn?). It sounded like a nice opportunity to take pictures... especially since most of the rock stars featured are "all American".
I thought the museum would be crowded today, given that it is a holiday, but it wasn't. I went right over to the Rock Stars' exhibit and started shooting right away. I'm including a slide show of just a few of the 200 pictures I took today. The exhibit was wonderful as are virtually all the exhibits at this museum. My only complaint is that the vehicles in the exhibit were parked so close together and the barricade/ropes were so close to the cars it was hard to get good pictures without them in it. But over all I'm happy with my photos and the cars and guitars were great!
You can't hail from the Motor City without being a big fan of cars. So you have to understand that my enthusiasm for them is genetically programed in me (Detroit born, Dearborn raised... me and Henry ;-) . I'm drawn to auto shows, exhibits, and cruises like a magnet. I was thrilled to see Bob Seger's 1969 Shelby Cobra GT Mustang right outside the entrance to the exhibit, and next to Kid Rock's 1969 Dodge Charger, "General Lee" from The Dukes of Hazzard (did you know Kid Rock was born in Dearborn too?). There were some great rides once you got inside and the exhibit ended with the vehicle of another of my favorite rock stars, John Lennon. His custom painted Rolls Royce is truly amazing!

The guitars were exhibited on the outside walls of the exhibit and they were quite impressive. Not only did they come in all shapes and sizes but they were played by famous rock stars too... Bob Seger, John Lennon, Jimi Hendrix, Gene Simmons, B.B. King, Bo Diddly, and Ted Nugent to name a few.
They also had a gift shop set up with rock memorabilia and that was fun to walk through (OK, I did buy a new ornament for my Christmas tree to remind myself of how I spent the 4th of July). There were reprints of concert posters for sale. It was amazing to see what ticket prices were back then. The Beatle's first U.S. concert at the Washington Sports Arena was $5.00 and the concert at Altamont Raceway in CA back in 1969 with the Rolling Stones, Greatful Dead, Santana, Jefferson Airplane, and Crosby, Stills, Nash, and Young was free. 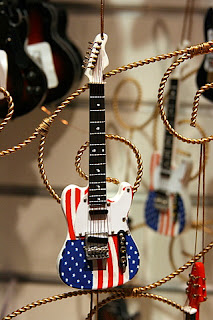 (My new ornament)
So all this got me to thinking... Lots of people have presidents, kings, and famous statesmen on their family tree (like Randy and Miriam) but no one ever seems to mention being related to rock stars, movie stars, or Pulitzer prize winning authors. Why is that? Somebody has be related to these folks, are you?
I can't claim to be related to any rock stars, movie stars, or authors but it just so happens that my best friend through junior high and high school (in Dearborn!) is a professional anthemist (among other things). If you'd like to end your day on a patriot note, visit her site, read up on our National Anthem and listen to her audio track of the Star Spangled Banner. She is my favorite songbird, Valerie Ash.
Happy 4th of July!
Posted by Jasia at 8:27 PM