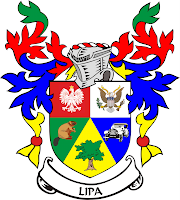 The simple translation for the Polish surname LIPA (pronounced Lee-pa with the accent on the first syllable) is "linden tree". But to leave it at that would be doing the name a grave injustice. And we can't have that now, can we? So let's take a look at the significance of the lipa in Polish culture.

According to Polish folklore, the lipa was considered sacred and under the protection of the Blessed Mother. Small roadside shrines were often built under lipa trees in honor of Mary. It was not uncommon for a ring of lipa trees to be planted around a village church. Additionally, the month of July (lipiec in Polish) derives its name from the lipa, mostly likely because the tree blooms in that month. And traditionally among the nobility, a lipa was planted on the day a child was born.

, we begin to see something of the significance of lipa.

There are other very significant reasons why the linden rose to such
importance in everyday Polish life. In July, the linden tree, laden with creamy white to light yellow flowers, exudes the sweetest fragrance imaginable that perfumes great distances. Sensing the nectar, bees come from far and wide to gather it, so that there is a constant buzzing humming around the blossoming branches. The linden was therefore an important chain in nature's cycle to provide the country folk with honey for use as a sweetener, and for making mead, as well as for the beeswax necessary for the making of candles.

There is one final gift which the linden so graciously provided. Few things were more precious to the Pole than his physical health. Each peasant knew that unless he was hale and hearty to rise each day with the dawn to till the soil, the future was unthinkable. Since doctors almost never came to the small rural villages, it was up to individuals to treat themselves as best they could with what nature provided. When plagued with a bad cough or feverish cold that was accompanied by much sneezing, the Polish peasant would reach up into the perfumed branches of the ever faithful linden, pinch off a few clusters of blooms and carry them home. placing them in a cup, covering them with boiling water, and perhaps sweetening the mixture with a small amount of honey, he would slowly sip the liquid. This linden tea induced sweating and the breaking of the fever, much to the joy and satisfaction of the individual.

In another of Sophie's books, Polish Herbs, Flowers & Folk Medicine

, she explores in greater detail the role the lipa played in the lives of Polish peasants. In this book she refers to the tree as linden rather than lipa.

Linden was a tree of inestimable value. It was used in woodcarvings especially shrines and holy figures and in the making of musical instruments. From its inner bark, rough shoes called chodaki were made as well as baskets and hats. The magnificent altar of St. Mary's in Cracow is made from linden. From its seeds, an oil was extracted for consumptives and for use in oil lamps. It made for wonderful honey.

All the parts of the tree were useful in Polish folk medicine. The bark and leaves were applied to the eyes and to inflamed areas of skin. For headaches, the leaves were applied to the head and a tea made from the flowers. It was also supposed to be helpful for hair loss and was known as a general panacea for nerve troubles. In old apothecaries, a distillation of the flower was supposedly effective for convulsions and epilepsy.

Now that we've established how common, valuable, and cherished the lipa tree was/is in Poland, let's move on to look at how common the surname is.

There is a surname web site at http://www.herby.com.pl/herby/ which includes a database of data from the Dictionary of names used in Poland today by Prof Kazimierz Rymut. The data was actually compiled back in the early 1990s but it is the best data of this sort available on the Internet. Enter the surname LIPA and you'll find that there were 2635 persons living in 38 of the then 49 provinces of Poland. Further, the breakdown of LIPAs in the top 5 provinces was as follows: katowickie=453, lubelski=332, kieleckie=329, tarnowskie=236, legnickie=143. (The breakdown for all 38 provinces is given on the web site.) Here is a map of Poland (generated at the web site http://www.genpol.com/) showing the distribution of the LIPA surname throughout Poland. My LIPA ancestors came from the village of Bobrowa in the Tarnowskie province. 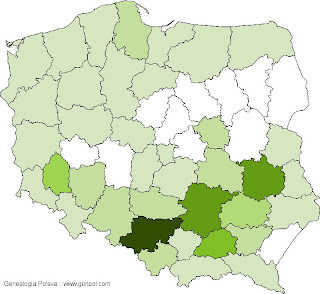 As it turns out, LIPA is a rather uncommon surname, even among the family of related surnames as identified in Polish Surnames: Origins and Meanings by William F. Hoffman. Hoffman's list (with the number of people with that surname in parentheses), based on the same data as the map and web site mentioned above, is as follows: Lip (532), LIPA (2635), Lipczynski (1317), Lipecki (471), Lipek (32), Lipiak (461), Lipiec (5610), Lipinski (23,390), Lipka (6955), Lipke (249), Lipkowski (902), Lipnicki (1570), Lipowicz (816), Lipowski (2863), and Lipski (9353). So we can see that even though the surname LIPA is not all that common, when you take into account all the related surnames it becomes a popular root in surnames in Poland.
As Poles with the surname LIPA immigrated to America they naturally concentrated in the areas of the country with large Polish populations. New York (Buffalo) , Michigan (Detroit), and Illinois (Chicago) were the most common locations. As with many surnames, LIPA has gotten mangled over the years and I've seen a variety of spellings for this rather simple surname: Lippa, Lipe, Lepa, Leppa, Leipa, and Leepa are among the misspellings I've seen.

I'm not sure how many people in America of Polish descent with the surname of LIPA are aware of the beloved tree they were named for. My guess would be not many. The linden tree here in America is sometimes known as the basswood. While it's not exactly a rare tree, it's not predominant in our forests either. This being the month of July when the lipa is in bloom, it might be easily identified by its scent and flowers. If you're interested in owning a lipa, you can purchase one at The National Arbor Day Foundation web site. They have 2 varieties, the Littleleaf Linden and the Silver Linden. Lipa tea can be commonly found at health food stores and Polish markets.

The LIPA coat of arms pictured above was created by me :-) The center shield features 5 symbols of my LIPA family, the Polish eagle, the American eagle, a beaver (for our ancestral village of Bobrowa, Poland which translates to beaver), an automobile (a symbol for Detroit, the Motor City where my ancestors immigrated to), and a tree to symbolize the lipa our family is named for.
Posted by Jasia at 7:44 PM