Remembering Vacations of My Childhood

Our family wasn't big on travel. But we did take a week-long family vacation every year. We almost always ended up going to the same places. In Canada. Always Canada (except for one year when we went to New York City... but turned around and came home after one day because my dad wasn't feeling well).
The vacations I remember most clearly were those spent in Ontario on the coast of Lake Huron. My dad's favorite place to vacation was Kincardine, a small town on the coast with a very Scottish flavor. One of my favorite memories of vacationing in Kindardine was attending the bagpiper's parade down main street every Saturday night. We always rented a cabin on the lake for the week we were there.
The cabins were very rustic... we had to bring our own bedding, cook and heat the place in a wood burning stove, have ice delivered for the ice box, pump our own water and haul it inside, and use an outhouse because there was no indoor plumbing. There was electricity... one single bare lightbulb hanging from the ceiling in each room ;-) How my mom hated that place! "This is no vacation for me!" she'd say. "I have to work harder here than I do at home!" She was right of course. While it was an adventure for my brothers and me and chance to go after the big one for my dad, it was a lot of extra work for poor mom. 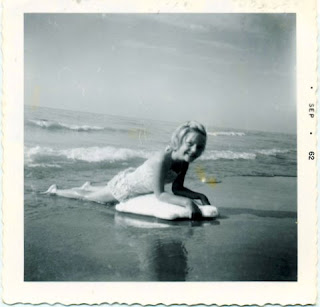 A picture of me playing on the beach at Kincardine in 1962.
My dad loved to go to Kincardine for the fishing. My brothers enjoyed this too. They were always after the sturgeons. One time they caught one that was too small and they had to throw it back. My dad told my brothers and I we'd catch him again next year when we came back for vacation. That was the last year we vacationed in Kincardine. It turns out that fish waited and waited for my dad and brothers to come back and get him. Just recently this sturgeon was caught just off the pier in Kincardine and I can tell just by looking at him that it's the same fish. Look at him now! 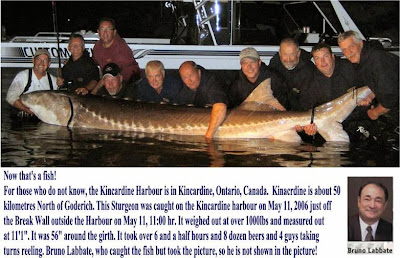 I couldn't resist the chance to share a good fisherman's tale!

Anyway... the drive to Kincardine from our house took about 4 hours. Usually we'd stop on the way up at Ipperwash Beach or Grand Bend. Ipperwash had the most wonderful white sand beach that went on and on for miles. The water was very shallow and you could walk out for a long ways before it got over your knees. We used to drive our car right into the shallow water and wash it down right in the lake. We weren't the only ones, lots of people did the same thing. Of course these days you can't do that sort of thing because it would pollute the water to do so. But back then there were no statues or policies to prevent that kind of an environmental hazard. We didn't understand the consequences of our actions, we were just stretching our legs from the long car drive.

Sometimes we stretched out our legs at Grand Bend otherwise known as "The Bend". It was reminiscing about The Bend that got me curious as to what the town looks like today. So this past Saturday I took a drive up to The Bend to see it through an adult's eyes. It's been over 30 years since I was there and it was fun to visit the place again. Grand Bend is about a 2.5 hour drive from my house. I stopped at Ipperwash Beach first and was thrilled to see that it hadn't changed much in 30+ years. The beach was still nice and sandy, the water was a beautiful deep blue, and it was still very shallow. No one was washing cars in it however. In fact, given how hot a day it was (90+ degrees) you would have expected to see more people in the water cooling off. The beach was full of people but there weren't many actually in the water. A short walk along the beach told the story. There was a caution sign warning people that the murky water might be due to bacteria in it. That didn't used to happen in the good old days. It's something we experience in the lakes and rivers back in Michigan too from time to time. It has to do with over population stretching the resources of the sewer system after a lot of wind or rain... and that's all I'm going to say on that topic.

Grand Bend the town, looks virtually the same as it did 30+ years ago. Main Street ("The Strip") hasn't expanded any though the shops that line it have. It used to be full of tacky souvenir shops and walk-up greasy dives that sold hamburgers and french fries (served with salt and vinegar Canadian style). These days almost all the shops sell beach clothing and the restaurants have a variety of food from Thai and Mexican to Wrap sandwiches and sit-down bistros. I walked the length of the strip twice looking for a souvenir shop but couldn't find one. I finally asked a shop keeper where I could buy souvenirs that said "Grand Bend" on them and she thought about for a long moment before answering that one of the bigger clothing stores might have something. Yeesh! How can you have a tourist town without a souvenir shop? (I never did find one, by the way. They did have a jewelry store though so I settled for buying some jewelry to remind myself of this family vacation spot.... don't you feel sorry for me? ;-)

The beach at Grand Bend looked different than I remembered it. Oh it still had white sand that went on for miles and beautiful blue water, but now there's also an observation building and concession stand built on the beach. And there's a tall building that looks to be a condo complex on the beach too.

Overall the towns had the same atmosphere as days of old. Ipperwash is a town/beach frequented by families with small children and Grand Bend is a party town for young adults. The Bend has an O.P.P (Ontario Provincial Police) station right in the middle of the strip but I was there basically all day and never saw a officer of the law. Bongs and drug paraphernalia are sold openly in shops that smell heavily of incense. But the officers don't come out of their office unless there's a problem and they are summoned. The drinking age is 19 so the town is full of young imbibers. I remember hearing the Beatles, the Who, and the Rolling Stones music blaring from the stores' speakers back when I was a kid. Now you hear a lot of techno, reggae, and new age music around town.

All in all it was a fun day and I'd go back again. I'd really like it to be a day when I could go into the water without fear of bacteria contamination though. It was fun to see it all and remember the good times we had there. I enjoyed capturing it in photographs but I wish I had some from my childhood to compare them too. Maybe one of these days I'll take a weekend and go up as far as Kincardine and check out that town too.