I Found a Bottle Tree!

A while back, Terry Thornton wrote a blog post about bottle trees. Before reading Terry's post, I had never heard of a bottle tree. I must admit I was intrigued with the idea. I was sure I had never seen one and figured that was probably because I haven't spent much time in the south. In fact about the only time I've spent in the south is on I - 75 heading south from Michigan to Florida. So you can imagine my surprise when I spotted a bottle tree in my very own neighborhood!

I was driving down the street one block over from mine the other day when the glare from a bottle caught my eye. I glanced over at it and then looked back at the road ahead. And then it hit me, "hey, those were bottles… It's a bottle tree!" Just like that I knew I had just seen what Terry had described. I was so excited and I wanted to take a picture of it right away but I didn't have my camera with me. A couple days later I was heading out with my camera for a photo shoot and I made a quick detour to the next block over to take a picture. And here it is, my neighborhood bottle tree. 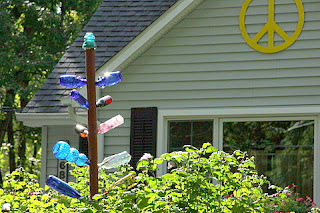 The front yard of the home with his bottle tree is, is quite "busy", if you know what I mean. I don't know the folks who live in this house but everybody in the area knows of this house. It's affectionately referred to as the " hippie house" because of the bright yellow peace sign on the front of it.

I have no idea how long the bottle tree has been there. As you can see in the photo the tree is partially covered by a bush, so I suspect it has been there awhile. Now when I look at it, knowing what it is, I think it's very pretty. It's never caught my eye before, at least not that I can recall. But I know that each time I drive down this street from now on I will look at this bottle tree and think of Terry.

If the leaves fall off the bush later in the fall perhaps I'll try to get another picture of the bottle tree. I assume the bottles go all the way down to the ground but I can't say for certain. You've got to admit, it is colorful!

I wonder if these folks have witch balls too...
Posted by Jasia at 9:37 PM