Time to Rock and Roll For a Good Cause 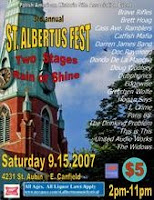 Mark your calendars for another fundraiser to support a local Polish church. No, now it's not what you think. This is not another Polish festival with Polka music and pierogi (not that I have anything against those things ;-) This is a rock/acoustic/jazz extravaganza for St. Albertus Church here in Detroit.

The 3rd annual St. Albertus Fest will be held just outside the doors of the church, on the corner of St. Aubin and E. Canfield streets, on Saturday, September 15, 2007. Tickets are $10 per person and the event runs from 1pm - 10pm. (I know this information is different from what is shown on the poster but I got this from St. Albertus' newsletter and I think that may be more current.)

The St. Albertus Fest is an annual fundraising and publicity event held by the Polish American Historic Site Association (PAHSA). The purpose of the festival is to raise awareness, and maybe some money, for the St. Albertus Historic site. St. Albertus was the first Polish Catholic Church in Detroit (est. 1872) and the Heart of the area of Detroit once known as “POLETOWN”. After its closure by the Archdiocese in 1990 a group of former Parishioners, Historians, and Preservationists established a 501-C3 non-profit under the name PAHSA, and reopened St. Albertus as a cultural history museum. PAHSA holds the St. Albertus Fest to remind the Detroit community that St. Albertus not only still exists, but is as beautiful and impressive as ever...

...If you love Art, History, Architecture, Music, Food or even Beer, then you don’t want to miss the St. Albertus Fest.

September 15th is just over a week away. So mark your calendars now and don't forget to come on down... and let's rock!
Posted by Jasia at 2:33 PM