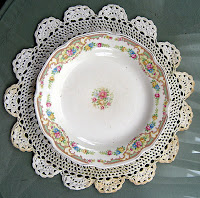 After my dish discovery at the Detroit Historical Museum I became more and more curious about my mother's dinnerware. I thought about who might know about my mother's dishes. I immediately eliminated my brothers since I can't imagine my mom having ever had a discussion with them about dinnerware. The next person who came to mind was my sister in law, Penny, who was a primary caregiver for my mother for a few years. As it turns out she stopped by for a short visit the day after I visited the museum.

I told Penny what I had discovered at the museum and brought out the dishes in question. She immediately replied that in fact my mother had talked about going to "dish night" at the movie theater back in the old days. She couldn't recall the name of the theater that my mother had mentioned but told me she would give it some thought and get back to me on that.

A few hours later she called me on the phone and gave me a list of theaters that she remembers my mother mentioning. One in particular stood out among the rest and that was the Senate Theater on Michigan Avenue on Detroit's west side. The Senate Theater opened in 1926 and is located at 6424 Michigan Avenue, Detroit 48210. It is just about 1½ miles from my grandparents' house. A quick check on the Internet indicates the theater building still stands, is owned by the Detroit Theater Organ Society, and is used exclusively for organ concerts.

Another person came to mind who might have known about my mother's dinnerware. And that person would be my mother's cousin Charlotte. So I gave her a call this afternoon and was lucky enough to catch her at home. Charlotte remembered that some theaters did indeed give out dinnerware on "dish nights". She didn't have any theater dinnerware herself and couldn't remember my mother mentioning where she might have gotten hers. But she was able to give me the names of the three local theaters that my mother would most likely have visited. She said she thinks the Senate Theater was the most likely one because she definitely remembered them giving out dishes. But she also named the Kramer Theater (also in the neighborhood on Michigan Avenue) and the Chopin Theater (also on Michigan Avenue but a bit farther west, close to the border with Dearborn). She also verified that ladies did collect theater dinnerware for their "hope chests". The pieces given out were all matching so one could get a complete set of dinnerware if they went to the theater often enough!

The photo I'm including with this post shows a piece of the "odd set" of my mother's dinnerware, the same one I saw in the window of the five and dime store in the Detroit Historical Museum. These are the dishes I suspect were given out at "dish night". At first glance, the dishes look expensive with the gold leaf trim and detailed floral pattern. But a close examination shows pits and blemishes in the glaze and porcelin. Definitely not "first quality".

If anyone can difinitively ID this dinnerware as a pattern given out at a Detroit theater on "dish night", please leave a comment! Thanks!
Posted by Jasia at 8:28 PM