What Part Did Labor Unions Play in Your Family History? 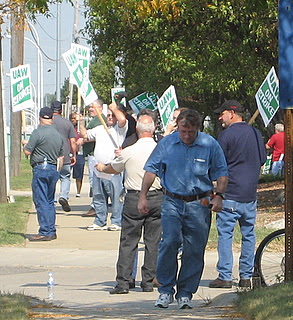 This morning the UAW (United Auto Workers) called for a national strike against General Motors Corporation. I'm very disappointed that the negotiations were not more fruitful because a work stoppage is a lose / lose proposition for both parties, for Southeast Michigan which depends so heavily on the auto industry, and for the state of Michigan as well.

Living here in Southeast Michigan all of my life, I've grown up on talk about the auto industry and the labor unions. The pulse of our local economy is determined by the health of the auto industry. We listen with interest to talk about new product introductions, safety features and recalls, and labor negotiations in much the same way that Midwestern farmers listen for pork belly prices and corn futures.

Personally, I've had two jobs that required me to be a union member (Michigan is a right to work state so if there is a labor union local in place when you seek employment from a given company you must join the union to work there). In both cases I lost more than I gained being a union member. In one case I lost a job altogether as a direct result of a union negotiated contract. Labor unions have not benefited me.

My father and brothers worked for the Big Three and were UAW members. It is their belief that they benefited as a result of organized a labor. My brothers, now retired, are still very concerned about the current UAW - GM negotiations as their retiree health benefits are at stake.

My maternal grandfather lost his business (company property destroyed by union thugs) as a direct result of labor unions. With his business gone he had to seek employment elsewhere and ended up working for the Cadillac Motor Car Company. So then he became a UAW member. I wish he was still alive so I could ask him his thoughts on organized labor. As a business owner and later as a member of organized labor he had the opportunity to stand on both sides of the fence. Did he support the UAW? Did membership benefit him? Was he ever able to forgive the other union members who cost him his business?