Little Billy Sanders Jr. died while serving his country on April 24, 1945 just two weeks before WWII ended. There are a couple of good sources that give information on the USS Frederick C. Davis. Wikipedia has a nice article, and NavSource.org has reunion and contact information for those who survived on that fateful day. Here's a description of the sinking of the ship from the Dictionary of American Naval Fighting Ships:

Returning to duty in the western Atlantic early in 1945 Frederick C. Davis served on coastal convoy escort and antisubmarine patrol service and in mid-April joined a special surface barrier force, formed to protect the Atlantic coast from the threat of close penetration by snorkel-equipped German submarines. It was one of these, U-546, which was contacted 24 April by Frederick C. Davis. Within minutes, as the destroyer escort prepared to attack, the submarine torpedoed her, hitting on the port side, forward. Five minutes later, she broke in two, and efforts to preserve the buoyancy of the stern, where the damage was less and the majority of survivors were located, failed. Her survivors abandoned the ship, with a loss of 115 men. They were taken from the water within 3 hours, and other escorts sank her attacker the same day. 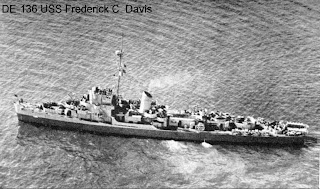 Photo courtesty of the United States Navy via NavSource.org
Billy Sanders' death was not the only one the Sanders family grieved over in 1945. Billy's father, William Sanders Sr., lived long enough to see the Purple Heart awarded posthumously to his son then died the following month, October 1945. Then Billy's older sister Ella died of cancer in November at 29 years of age. The Sanders family had more than their share of heartache in 1945.

The story of Billy Sanders Jr. was a hard one for me to tell. I'm all 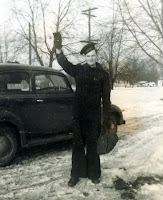 about happy endings and this story was certainly not that. But it was a story that needed telling in the sense that it reminds us of how often war stories don't have a happy ending. Tom Brokaw coined the phrase "The Greatest Generation" to describe the men and women who fought so bravely for their country in WWII. Billy Sanders is a perfect example of the loyalty to country and bravery of spirit exemplified in that generation.

Here's to you Billy Sanders Jr. Your body may have died in the cold north Atlantic waters but your memory and your spirit live on in those of us who remember you and believe in the cause you fought and died for, defending the United States of America.