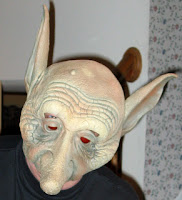 Randy wanted to see more pictures of me so I dug one up that has a story to go with it.

Several years ago, I put on a full court press to find living family members of mine in Poland. I'm not going to go into all the ways I did that now but I will make a point of writing it up sometime in the future. Anyway, I was able to connect with a cousin who although he was only 16 at the time was able to speak English surprisingly well. His name is Piotrek. He and I became addicted to chatting online with each other. When I say addicted, I mean that we both couldn't wait till we could chat again and once we got started it was hard to stop.

To my family's and his family's amazement, Piotrek and I would chat online (using Yahoo Messenger) every day from 3:00 pm to 5:00 pm (EST). This went on for many months (almost a year) and we never seemed to run out of things to say to each other or questions to ask each other. I was full of questions about the family history (which he would consult with his father and grandfather about) and life in Poland. Piotrek was full of questions about life in the U.S. and in Detroit. He was a big fan of all things American (especially Eminem and Kid Rock ;-).

At one point I got the idea that we should use web cams so we could see each other while we chatted. Piotrek loved the idea but he couldn't buy a web cam in Poland. So I bought a pair of them and sent one to him. It worked out great and from that time on we had visuals while we chatted.

When Halloween came, I put on the mask in the photo above just before I signed on. When the screen came on Piotrek was so startled by what he saw he almost fell off his chair! The look of surprise on his face was absolutely priceless. I laughed so hard I almost fell off my chair! Piotrek ran to get his dad and when he saw me he burst out in the loudest belly laugh you ever heard!

When we were finally able to compose ourselves Piotrek asked me why I had the mask on. I was surprised he didn't make the connection with Halloween so I asked him if he celebrated Halloween. He told me that he had heard of it but no, in Poland they didn't decorate pumpkins or go trick or treating. It was more like a Hallmark holiday where people might send each other a funny card or play prank on them but nothing like we do in the U.S. He was fascinated to learn about all our Halloween customs. He told me that Halloween was getting more popular in Poland but nothing like in the U.S. He thought it sounded like fun though and was hopeful that one day Poland would celebrate Halloween like we do.

The cultural exchange that Piotrek and I shared was wonderful. I learned about the land of my roots. He practiced his English and learned about life in America. It was a match made in heaven. It is absolutely one of the best aspects of genealogy research in my opinion... finding living family in one's homeland. Priceless.
Posted by Jasia at 9:21 PM