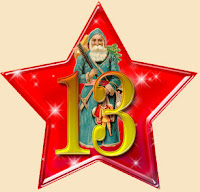 I want to say it was about 10-12 years ago when my mom decided she didn't want any more Christmas gifts. " I don't need anything, I don't want anything, so just save your money!", she told us. My brothers and I had been chipping in and buying her one nice gift for Christmas for the previous several years… a microwave oven, a ruby and diamond ring, a VCR, etc. We were running out of ideas and she wasn't helping us any.

We'd been buying her smaller things like new bedsheets and bath towels, nightgowns and robes, sweaters and slippers, a coffee maker or can opener, for all the other occasions during the year (Mother's Day, her birthday, Sweetest Day, etc.) so she didn't need any of that stuff. I racked my brain trying to come up with gift ideas. She was a tough one to buy for. She didn't enjoy reading except for the newspaper, which she already had a subscription for. She had given up on her few hobbies (gardening, sewing, crocheting) because of arthritis in her hands. She had more clothes in her closets than I did. I was really stumped.

Kenny Rogers was touring with his Christmas show at that time and one of the stops was Detroit. I was pretty big on country music then and enjoyed going out on the town. I wanted to go see the show and it occurred to me that my mom might like to see it as well. She wasn't a country music fan but she was a fan of Christmas music. She wouldn't buy a ticket for herself, nor would she feel comfortable driving into Detroit alone at night. But I knew she'd be waiting at the front door and ready to go if we invited her to go with us. My husband thought it was a great idea and suggested we go out to dinner at one of the downtown restaurants and make a whole evening of it. So that's what we did.

My mom really enjoyed herself and talked about it for months afterwards. The more I thought about it the more I realized how little my mom was getting out anymore. She always used to enjoy getting all dressed up and going out dancing before she got married. After she had a family she looked forward to going to weddings as an excuse to get all dressed up and go out for the night. But the family had gotten older and there weren't that many weddings anymore. Mom just wasn't getting out enough. I couldn't arrange for dances or weddings, but I could certainly find opportunities to take her out on the town for the night. I made a point of taking her out more after that.

When the next Christmas rolled around another great entertainment opportunity presented itself. For the first time ever, the Radio City Rockettes would take their Christmas show on the road. A contract was negotiated for them to come to the Fox Theater in Detroit and the city was all abuzz about it. I didn't need to ask my mom if she would like to go. I knew she would. We ordered the tickets, made a dinner reservation, and I called mom to tell her what her Christmas present was. She was thrilled! Just like the previous year we had a wonderful evening out on the town and enjoyed the show tremendously. 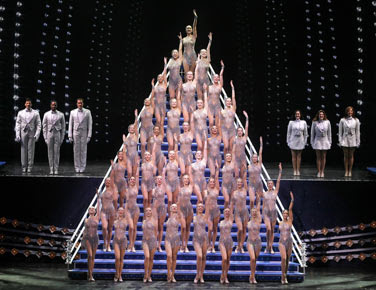 Photo courtesy of the RadioCity.com website.
My brother and sister in law said they couldn't remember seeing her that happy in a long time. It was all she talked about during that Christmas season. And so a trend was born. After that it was easy to shop for mom for Christmas. All I had to do was decide on which show we would see and which restaurants we would dine at. Mom looked forward to those holiday evenings out every year.

We took her to a variety of shows over the next several years including Christmas concerts my daughter played in with the Southern Great Lakes Symphony Orchestra. The last holiday evening of entertainment we had together was in 2005. We took her to see the Lira Ensemble, a Polish dance group. Last year she was living in a facility for Alzheimer's patients. She was wheelchair bound and had developed a very short attention span. We didn't think it would work out well to take her out for a night on the town. We did take her out to a nearby restaurant for lunch one day just before Christmas. That's the best we could do.

There's something more exciting about going out to the theater and fine dining at Christmastime than any of the time of the year. People really put on the glitz and the glamor when they get dressed up. Theater lobbies and restaurants are decked out with red bows and twinkling lights. It's like putting an exclamation point on an ordinary evening of entertainment.

I'm so glad mom decided she didn't want any more Christmas presents. If she hadn't told us that we would've kept on buying her conventional Christmas gifts and we would've missed out on all those exciting holiday nights on the town. It was much better this way. The only thing that would have made it better is if I had taken pictures of us all prettied up.