Welcome to my quirky dinner party!

They say a picture is worth a thousand words, so this image should tell you something... but I'm not sure what! 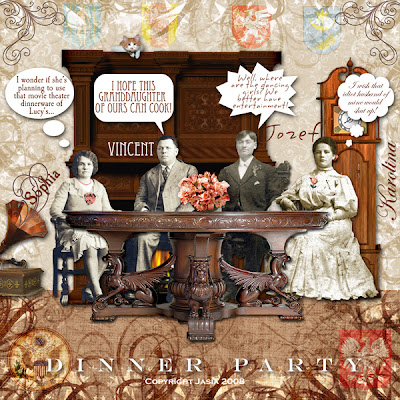 They say you can't miss what you never had, but that's not true. I never had the chance to meet three of my four grandparents and I've missed them all my life. Karolina died 16 years before I was born, Jozef, 7. Vincent died a mere 6 days before I was born. I can distinctly remember missing them when I was a child. It always bothered me that I didn't know my grandparents.

Zofia died when I was 13 but I never really had a chance to bond with her. By the time I was born she was frail and losing her eye sight due to complications of diabetes. She didn't speak English so I never had a conversation with her. I don't remember ever sitting on her lap, never got to hear her read to me, never went for a walk with her or tasted the homemade soup that she was famous for. Even though I'd met her, I never interacted with her. I miss knowing her too.

It would be so wonderful to have dinner with my grandparents. Do you know what I would ask them? No? Neither do I.

I don't have a list of questions to ask them about my ancestry. Oh sure, there are things I would like to know. But the answers aren't all that important to me in the scheme of things. What I would most enjoy is simply the experience of being with them.

I would love to hear the sound of my grandpa Vince's laughter. I've often wondered if it was deep and hearty or the silent kind that makes one's shoulders shake.

I wish I could hold my grandpa Jozef''s hand and look into his eyes. I wonder if his hands were as big and strong as my dad's were and if his eyes were the same shade of blue.

How I would love to hug my grandma Carrie and pull a picture of her great grandchildren out of my wallet to show her. I wonder of if she would see anything of herself in them.

And then there is grandma Sophie. More than anything I would like to shake her hand and thank her for her courage. She came here from Poland at the age of 19, traveling with just a girlfriend. She had to know there was a good chance that she would never see her family again. But still, she left behind everything familiar to her and set off on a 6,000 mile journey to a country where she couldn't speak the language in order to support her family back in Poland.

I'd like to crank up the old Victrola and see whose foot starts tapping. I'd like to pour some libations and share some funny stories just to see everybody laugh! I'd like to bring out platters full of good traditional Polish food... kielbasa, kapusta, bigos, pierogi, golabki, barscz, and pazcki and eat till we couldn't eat any more! I really don't care what we'd talk about just that we'd enjoy spending time together.

I'd take photographs, lots and lots of 'em... video and still. I'd invite Susan along to make audio recordings of the event and DearMYRTLE to do a podcast! Steve would definitely have to be there to translate for us, and I'd want both Becky and Thomas to write it all up (you can't expect me to blog about it while I'm immersed in the experience!). FootnoteMaven would have to come too to figure out the proper way to cite the experience as a genealogy source. I'd want Randy, Miriam, Craig, and Blaine to join us just so I could brag, "I have cyber friends who are related to several presidents of the United States, one was a judge, and one is a genetic genealogist!" I just know my grandparents would be impressed!

I'd want Janice to be there to capture the images she would need to make a video of our little dinner party like no one else can ;-) It would be nice if Bill could join us with a supply of flutaphones and John with a Dudelsack so that we could make merry music together. Hey, do you think if I invited Donna she would write it up for a national genealogy magazine? Oh and my friend Valerie has to come too because she would understand the significance of this for me (she's a genealogist too but not a blogger). And then I thought maybe we'd round out the evening by taking a little ride around Detroit so that my grandparents could see what has become of their city. I'd like to stop in at Sweetest Heart of Mary Church where both couples were married. I know that would mean a lot to them. I'm thinking with so many people we'd definitely need Apple to bring her bus!

So there you have it. That's my ideal dinner party with my ancestors. The image above is actually a digital scrapbook page I created in the last couple of days. It's done in a style known as "quirky" which not only has odd elements and incongruent messages, it also uses blended layers and contrasting textures. It's supposed to be one of those pictures where the longer you look at it the more little things you discover in it. It was my first attempt at a "quirky" scrapbook page and I ran out of time before I could put in all the elements I wanted to include. I have somewhere between 10-12 hours of design time in it. It sounds like a lot but I had such fun doing it, and the first time for anything takes a little longer. I plan to add a few more elements and then print and frame it and hang it in my dining room. It'll be a great conversation piece don't you think?
Posted by Jasia at 3:07 PM