Lisa recently posed the question, “Where was your family in 1908?”. Many others have written about where their family was 100 years ago and now I’m weighing in with a snapshot of where my family was back then. It’s been a good exercise, looking back. I could have told you my family’s physical whereabouts (right down to the street addresses) off the top of my head. But I wanted to put their place in the world in context. Exploring their world 100 years ago has been very enlightening.

My ancestors’ whereabouts in 1908 fall into two categories, those who had immigrated to Detroit, Michigan from Poland, and those who were still in Poland (pre-immigration). Let’s begin with those who were already here.

Detroit's riverfront in 1908. This was their world.
(From the Library of Congress Photo Collection)
My paternal great grandparents, Szymon and Ludwika LIPA, immigrated to Detroit from Poland in 1881. So in 1908 they had been living here 27 years. Szymon was 66 years old, Ludwika was 51. They had been married 32 years, had 11 children (9 still living in 1908) and 10 grandchildren (an 11th born in November 1908). They lived in a house they owned at 57 Superior Street on the east side of Detroit. It was a small single family frame house with a stable in the backyard. They had no way of knowing it back then but much of their immediate neighborhood would become the sprawling Detroit Medical Center complex, with Detroit Receiving Hospital sitting right on top of what was their house and yard.

In 1908, 7 of their 9 surviving children were still living in their home, including their daughter, Karolina (my grandmother), with her husband of 1 year (himself an immigrant from Poland in

1905) and their infant son. Back in those days it was common for adult children to live at home with their parents until they married, and sometimes even after that.

I don't have a photo of my great grandparents but here is photo of my grandmother, Karolina LIPA (daughter of Szymon and Ludwika) and her husband Jozef LASKA on their wedding day in 1907.

Szymon and Ludwika and their children belonged to Sweetest Heart of Mary parish in 1908. In fact, they were founding members of the parish when it began in 1889, having been members of St. Albertus parish prior to that. The family and these two parishes were in a large east side Polish neighborhood where recent immigrants from Poland made up the majority of the residents.

Szymon worked as a day laborer, which means he didn’t have a steady job with one employer. He went out each day looking for a work crew to join. Sometimes he would get hired for the duration of a project but often he just worked for daily wages. The children would have attended school through the 8th grade at Sweetest Heart of Mary parish school and then would have been expected to get jobs and help support the family. Even the girls would have been expected to work outside the home.

My grandmother, Karolina, worked in a local cigar factory prior to her marriage at age 17 (in 1907), and afterwards too until she was pregnant with her first child (which was only a matter of weeks ;-) The national Fair Labor Standards Act was not declared constitutional until 1941. There were some child labor laws enacted as early as 1907 but there were numerous gross violations of them. Photo-journalist Lewis Hine went around the country from 1908-1912 photographing children at work. There’s a wonderful website, The History Place, that tells about Lewis Hine and shows some of his powerful photographs.

If we broaden our look at my grandparents’ and great grandparents’ world in 1908 to include significant things going on in the city of Detroit (outside of their Polish neighborhood) we find the groundwork being laid for two legacies that would become lasting images of the city to this day. The first involves the Detroit Tigers baseball club winning the American League pennant for the second year in a row (they lost the World Series in 1907 and 1908 to the Chicago Cubs) and thus began Detroit’s legacy as a great sports town. I have no way of knowing if my great grandparents, grandparents, or any of my grandaunts or uncles ever went to a Tigers game. But they very well could have. The games were played at what was Bennet Park back in those days. Tiger Stadium would be built on the same site in 1912. 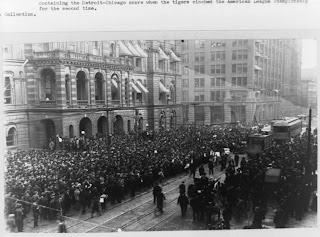 Baseball fans - crowd in front of the City Hall, Detroit, Oct. 6, 1908, watching the Free Press scoreboard containing the Detroit-Chicago score when the Tigers cinched the American League championship for the second time. (From the Library of Congress Photo Collection.)
The other significant legacy started in Detroit back in 1908 involved Henry Ford and William Durant. Ford’s Model T, aka the Tin Lizzie, was first introduced in 1908. With a price of $275 for the Roadster model (with no options for added extras), it became mass produced and available on a large scale. Ten thousand were manufactured that year. At the same time, William Durant (a Flint native) realized there were too many players in the budding auto industry and he formed the General Motors Company (the predecessor to General Motors Corporation) headquartered in Detroit. He even offered to buy out Henry Ford, and they almost had a deal but it fell through at the last minute. Still, these two men created industry giants that helped define Detroit as the Motor City. Their companies provided work (and autos!) to several of my family members. My maternal grandfather, a couple uncles, my father, both brothers, and several cousins worked for Ford Motor Company or General Motors Corporation at one time or another. My maternal grandfather owned a Model T as well (1925). 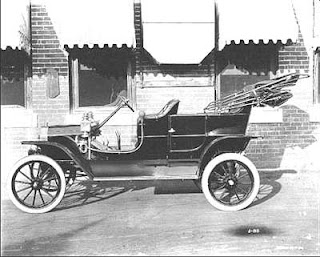 1908 Model T - Touring (From the OldCarAndTruckPictures.com website.)
Other important events in Detroit and Michigan in 1908:
U.S. history events in 1908:
Culture of the time, 1908:
In addition to the websites linked to above, I also used the following sources for my information:
Poremba, David Lee. Detroit in Its World Setting. Detroit, Michigan: Wayne State University Press, 2001.
Woodford, Frank B., and Arthur M. Woodford. All Our Yesterdays. Detroit, Michigan: Wayne State University Press, 1969.