What's in a Grandparent's Name?

Randy Seaver recently wrote a post about the names we use to refer to grandparents. When I read it I just knew I had to respond.

When I was born my great grandparents were long since deceased as were three of my grandparents. That only left my grandmother who I called "Grandma". (Geographical reference, Detroit, MI)

When my kids were born they had 3 grandparents, one grandfather and 2 grandmothers. Their grandfather wanted to be called "Grandpap" which was what his father was called by his grandchildren (Geographical reference, Pittsburg, PA). My daughter couldn't quite get "Grandpap" to come out right. It came out as "Pap-pap", and everybody thought that was cute. He didn't have a problem with it so it stuck.

Both grandmothers went by "Grandma" which presented some confusion when referencing them. Usually we would attach their surname after "Grandma" to clarify which of them we were referring to. When my son was just a toddler, and didn't understand the concept of a surname, he asked if I meant "Grandma with the blue car". (We're in the Motor City, remember. Cars have great significance here, even to toddlers!) She did in fact drive a blue car. This is another case where we all thought it was cute and it stuck, but it got shortened to "Grandma Blue Car".

From the time my son was born until last year when his grandmother died (16 years) she always drove the same car. For him, she'll always be "Grandma Blue Car". 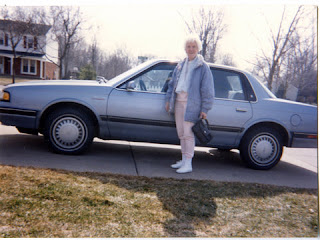