It Was An Ugly Car!

I sat back on the bed in my dorm room and thought about the upcoming weekend. The football team had an away game scheduled so there would be no going to the Big House on Saturday. Campus just isn't the same when the Wolverines were on the road.

I lit up a cigarette and debated about going home for the weekend. I should do laundry. I could watch the football game on the color TV at home instead of my little black and white TV here in my room. I sure could go for some of mom's home cooking. I'll do it!

I finished my cigarette and popped open a can of Coke. Then I picked up the phone and made the long distance call home.

"Oh every thing's fine here. How are your classes going?"

"Great! I love my classes and I love being on campus. The classes are pretty hard though. I get a lot of homework."

"Yeah. So what's new around the neighborhood?"

"Oh nothing much. Dad bought a new car."

"Well, yes. He figured we needed a second car so I could go to work or shopping while he goes for his dialysis treatments, you know."

"So what kind of car did dad buy?"

My heart started racing... did she just say, "Mustang"? Could it be true? My dad bought a Mustang as in muscle car???

"Well, this one is brown with a black interior."

"Huh. Well that's just great mom! Can I drive it?"

"Can you pick me up tomorrow after classes? I wanna come home for the weekend. I have loads of laundry to do. There's no home football game this weekend so it would be the perfect time."

"Sure! I'll come pick you up but I'll be in the Olds. Dad doesn't have plates for the Mustang yet."

"Yeah, that's good. I'll pick you up in front of the dorm. Try to be waiting so I don't have to pay for parking."

"I'll be watching for you mom. See you then!"

Will wonders never cease? Dad bought mom a Mustang. Huh, must have gotten a good deal on it... oh man, this is so great! Who should I call? I'll call Karen first then Denny, to let them know I'm coming home for the weekend. Then I'll call Bonnie and Randy. Wait till I tell them about our new Mustang! They are going to be sooo jealous! A Mustang! Wow!

Friday afternoon on the drive home...

"I already told you, it's a brown Mustang. What else is there to tell?"

"How big is the engine?"

"I don't know. It's a standard engine I think."

"Does it have air conditioning?"

"No, nothing like that. It's an automatic with power steering. It has some body rust but dad says he knows some guy that will fix it up."

"Does it have a stereo?"

"No, just a regular radio."

"Boy, I can't believe dad bought a Mustang. I can hardly wait to see it!"

"What's so special about a Mustang?"

"Well, they're a sporty muscle car mom. They're the bomb!"

"It doesn't look like a sporty muscle car to me. It's just a small car."

Uh oh. This isn't good. How can it not look like a muscle car? A feeling of doubt begins to crawl all over me...

"Are you sure it's a Mustang mom?"

"You think it might be a Maverick? A Maverick is smaller car and it's not at all sporty looking."

"Well, maybe it's a Maverick then. Mustang... Maverick, they all look the same to me."

We turned the corner and there it was... a 1970 brown Maverick with rust holes parked in the driveway. My heart sunk. Deep down inside I knew it was too good to be true. And here was the proof.

I was very disappointed with what I saw but I didn't express that of course. I got out of the Olds and walked around the Maverick trying to think of something nice to say about my mom's new car. It had rust holes all right, a couple of them on each side near the rear fender. I opened the passenger door and looked inside. Black vinyl seats, no carpeting, AM radio. Definitely not a cool car.

"Yeah, and it's clean inside." I replied.

"It'll do. I'm just happy to have a car of my own. We should have the plates on it next week Monday so the next time you come home you can drive it."

"That's great mom!" I said and wondered to myself how I was going to explain this to all my friends who I'd called to brag about it. Not only wasn't it a Mustang but it was a shit brown Maverick with rust holes, vinyl seats and an AM radio! It was down right ugly!

Truthfully, I don't remember how I explained the Maverick to my friends. I just remember how disappointed I was that it wasn't a Mustang and how ugly it looked. I did drive it the next time I was home but as it turns out I didn't give the Maverick's ugliness a second thought. The next time I went home, two weeks later, it was for my dad's funeral. Two weeks after that I turned 18 and the car was transferred to my name. It was the last car my dad bought and he'd bought it with me in mind. He knew he was dying (everybody in the family knew but they didn't tell me) and he'd wanted to make sure there was a car for me to drive.

To this day I affectionately refer to that car as, "my shit-brown Maverick". It was my first car and I drove it for a couple of years until the floor boards rusted through. The early 1970s were a bad time for body rust on cars. But it had a good engine in it for all its ugliness. It got me to and from campus in some mighty bad snow storms and wicked weather. My brothers saw to its maintenance and picked out my next car for me as well, another equally ugly car that also proved to be good, reliable transportation. It was a 1968 Ford Fairlane, the poor relation to the sexy Torino.

I wish I'd thought to take a picture of my little shit-brown Maverick but I didn't. I did come across a 1973 Maverick in that same color at a local Motor Muster a couple years back. It's a 4-door with a vinyl top and a light interior. Mine was a 2-door hardtop with a black interior. But the body styling didn't change much from 1970 to 1973 so when I look at this car it reminds me so much of my first car... the one my dad bought for my mom. And me. 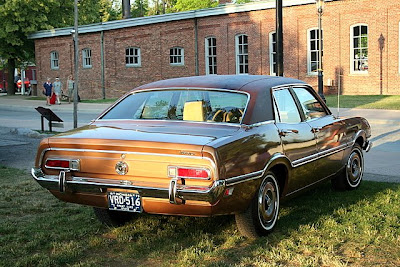