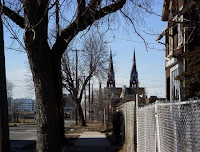 Yesterday morning I attended Easter Mass at Sweetest Heart of Mary Church in Detroit. It was a beautiful Mass in a beautiful church. I never cease to be amazed at how this inner city parish thrives at a time when historic Polish churches around the country are closing their doors. This church is located in a very ugly, dilapidated, and largely abandoned section of the city that is struggling to remake itself. It is not a safe neighborhood where people want to hang out. The parishioners who attend this church do not live in the neighborhood. They all live in the suburbs and drive in to this unsafe and dirty section of the city to attend Mass at this beautiful church.

The core of the parishioners of Sweetest Heart of Mary are elderly. Most of them have long family ties to the parish and attended this church and school in their youth. But in recent years the parish has seen new growth from young people. Couples in their twenties and thirties, all white, mostly of Polish descent, are marrying in the church, having their children baptized in the church without any previous affiliation to the parish. Only a few of these younger people attend Mass in this parish on a regular basis. Others may attend weekly Mass in suburban churches coming downtown only on special occasions like Easter, or perhaps they are " cafeteria Catholics" who attended Mass infrequently, usually on holidays.

In any event, I was struck by how many young couples with very small children (infant to five years old) attended Mass yesterday. Mind you, this was not the children's mass that I attended, that was held earlier in the morning. Yet everywhere I looked there were couples with little children. In four rows of pews off to my left I counted a dozen children under the age of five, another dozen in the four pews off to my right. It was just delightful to see these young families make the very deliberate act of choosing to attend Easter Mass at a church that was not convenient or comfortable to get to.

I wanted to ask them, "Why do you do it?" But I would never be so bold. I suspect that many of them were looking for the ethnic connection. The suburbs of Detroit are filled with catholic churches, many beautiful ones in fact. I don't doubt that these folks could have found a closer church to attend if it was just the act of attending Mass that motivated them. What makes this church unique is its Polish ethnic affiliation. So I have to assume that many were willing to "go the extra mile" just to connect with their Polish roots. Polish pride tends to be a quiet thing for many, something only witnessed at the holidays and forgotten about the rest of the year.

In my youth I was not outspoken about my own Polish pride, but it was always there. I wonder if I would've made the effort to bring my children to this church had I known about it when they were mere toddlers. I'd like to think that I would have. I applaud those who make the effort to introduce their children not just to their catholic faith but to their Polish roots as well. I hope they will continue to make the effort even if it's only done on holidays. There's so little opportunity to immerse in one's ethnicity these days.
Posted by Jasia at 8:03 PM