I'm In And I'll Double

Laura of The Virtual Dime Museum started it by posting an article called From The Ministry Of Silly Hats.

FootnoteMaven saw that as a challenge and decided to up the ante with I'll See You And Raise You Two. She invited me to play by asking, "is there a silly hat, pine cone necklace wearing German/Polish festival we're not aware of? Jasia, do you know of one?" Well, it just so happens I do. Here in the Detroit area we call it the Hamtramck Polish Festival. 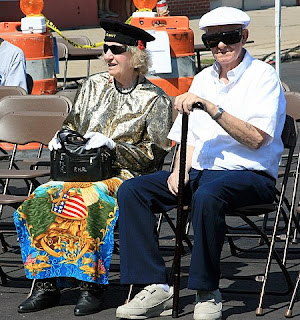 Instead of a pine cone necklace, this lovely lady is wearing a necklace of black amber. Amber is fossilized tree resin, pretty much the same thing as a pine cone only older. She's got the silly hat working for her. And just look at that Americana/eagle skirt, the white gloves, and those cowboy boots. She's a classic!

Who else wants to play? Know of any Polish/German, silly hat and pine cone necklace festivals?


This photo was taken by me at the 2007 Hamtramck Polish Festival in Detroit, Michigan. It's part of my private collection.
Posted by Jasia at 7:34 PM