Mom Was A Student Of Environmental Education

My mom, Lucy, began her formal education in the fall of 1923 at Sill School, a Detroit public grade school that was located on the southeast corner of 30th and Herbert streets in Detroit's west side Polish community. The school was a short walk from her home, right at the end of the block and across the street from the bakery her family owned. It's where she first learned to speak English (the family only spoke Polish at home). She only attended Sill School for one year, kindergarten, before she went on to attend Assumption of the Blessed Virgin Mary grade school. Sill School opened in 1905 and was closed some time ago. The building has since been torn down. 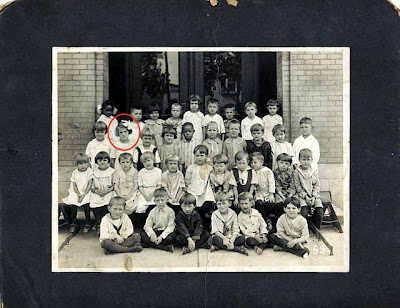 Here's is a photo of Lucy's kindergarten class from Sill School, Detroit, 1923.
Lucy's family were members of Assumption BVM parish, located at 5207 Lovett Street, in Detroit. The parish had a grade school (opened in 1913, grades 1-8) and that's where Lucy spent her early years. Classes were taught by the Felician Sisters in both Polish and English. Mom had lots of great memories of Assumption School. She was a good student too, as can be seen from her report card. Back then report cards had numbers instead of letter grades. 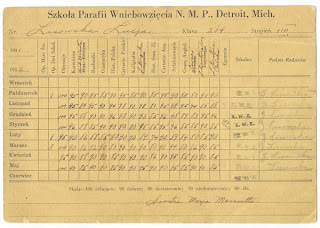 This is my mom's report card for the 8th grade (1931-1932) from Assumption School. The words in the column on the left (in Polish) are the months of the school year. Grades were given out beginning in October (Październik) and ending in May (Maj).

Lucy graduated from Assumption School in May of 1932. Here is a picture of her graduating class. 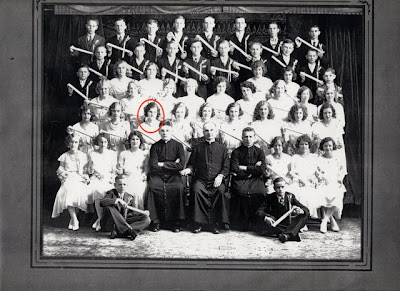 And here is a picture of Assumption School and Church (One building, church in the basement, school on the main and second floors). 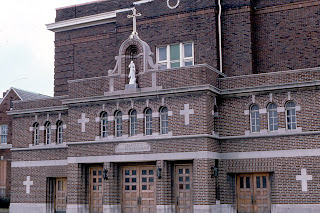 Back in the 1930s, high school didn't start until the 10th grade in Detroit. So that meant that mom had to attend middle school for one year before going on to high school. She attended Condon Middle School (public school), located at 1314 W Grand Blvd, in Detroit for the 1932-1933 school year. I have no pictures to share of her middle school year. I remember her telling me that she was really bored while at Condon. Her studies at Assumption had taken her beyond the level of 9th grade classes at Condon, something not uncommon with a Catholic school education.

In the fall of 1933, Lucy entered the new Detroit Northwestern High School (public school). She didn't want to go to Northwestern. She would have preferred to attend the neighborhood high school where all her friends were going. That would have been Chadsey High School. But her older sister, who had missed a good deal of school due to illness, had chosen to go to Northwestern to avoid being with her grade school classmates who had teased her because she "never knew the right answer when called on". Her mother told Lucy she should go to Northwestern because she was already driving her sister there and she wasn't going to drive Lucy to yet another school. So, reluctantly she went.

Lucy's high school years were not particularly happy ones. She did well enough in her classes but she didn't know anyone and making new friends didn't come easily to her. Add to that the fact that she was in high school in the midst of the Great Depression. She wasn't allowed to join any after school clubs or activities because it was too far to walk home and her mother wasn't willing to make a second trip to pick her up from school. Instead she joined the Young Ladies Sodality (a social club for young ladies) at Assumption Church and eventually became treasurer and vice president of the organization. She also joined the church choir. Her friends and social life continued to center around the church and continued after her graduation from Detroit Northwestern High School on June 18, 1936.

So ends Lucy's formal education. She didn't go on to college and as far as I know she never took any other formal classes. That wasn't the end of her education though. Lucy's education continued on in the form of what I think of as "environmental learning", in other words, learning from sources in her environment.

As far back as I can remember, mom had a radio in the kitchen and it was almost always on. She rarely listened to music on that radio preferring to listen to Detroit's local all-news station, WWJ (950 on the AM dial). For someone who was a SAHM, she was amazingly knowledgeable on current events. She once told me that she kept the radio on all day to keep from getting lonely. I did the same thing myself for many years (now I'm a CNN junkie ;-) .

WWJ (the program still exists... you can listen to it on the internet, by podcast, or on WNZK 690 AM, another local radio station, and amazingly it's still hosted by Bob Allison!). The show began on Febuary 5, 1962 and featured recipes and household hints. It's a call-in show where one person might call Bob Allison asking how to get a chocolate stain out of carpeting and someone listening who'd discovered how to do just that would call in with the answer. Recipes were shared, as well as gardening tips, cleaning and storage tips, and advice on just about anything that needed doing around the house. My mom was a big fan and long time listener of Ask Your Neighbor. She learned about more uses for vinegar from that show...

When it came to politics, my mom was big fan of talk show host Lou Gordon's television show, "The Lou Gordon Program" which aired on Detroit's local public broadcasting station, WKBD-TV (Channel 50) beginning in the late 1960s. She really enjoyed seeing Lou take on politicians and challenge their views and their party positions. He was a controversial one that Lou!

In the 1970s, after my dad died, my mom was a loyal watcher of "Wall Street Week" hosted by Louis Rukeyser. She wouldn't answer the phone or talk to any of us who came into the house while this show was on. At about the same time, Monty Korn had a radio show called "Money Talk" on our local station, AM 1270, WXYT. These shows were the basis of Mom's financial education and they served her well. She started investing in the stock market after she went to work full time and it was simply astonishing how well she did with her investments. I guess Louis and Monty knew what they were talking about!

My mom's day wasn't complete without reading the Detroit News. As far back as I can remember we subscribed to this daily newspaper which was home-delivered about 4pm each afternoon. My dad used get home from work about 4:30 p.m. and that's usually when we'd sit down to dinner. Right afterwards mom would do the dishes and put away the leftovers and then she'd sit down to read the paper. She was a clipper too! Oh boy did she love to clip things out of the paper... articles, coupons, recipes, ads, etc. And bless her heart, she was a recycler too. When she and my dad were done reading the newspapers they would get bundled up and taken over to the paper drives held every so often at her local church to help support the parish school.

Most evenings mom would go to bed at 10 p.m. She had to get up at 4:30 a.m. to get my dad off to work so watching the late news was something she only did on weekends.

My mom wasn't one for formal classes or "booking learnin' ". The only book I remember her checking out of our local library was a how-to book on reupholstering furniture. But you'd never know that to talk to her. She was a very bright, articulate woman who knew what was what about the world around her. And she sure knew how to cook, clean, garden (don't get me started on her green thumb!), and sew with the best of 'em! (And she used vinegar in more ways than you can imagine ;-)

What I remember my mom saying about education: "Your education is something no one can ever take away from you. You have it for life." 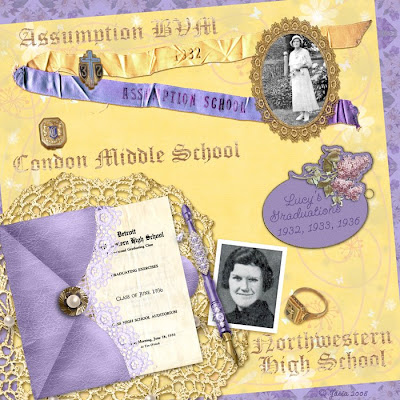 Digi-scrapping kit: "Inherent Blessings", created by Netta of the Creative Victorian blog. Yellow paper from "Lovin Spring" kit by Jan Hosford on the Jan Hosford Designs blog. I also used an overlay created by Adeyeo of the Adeyeo blog.
Posted by Jasia at 7:26 PM