I've been doing a lot of thinking about which individual on my family tree had the most "independent spirit" and I'm finding that the longer I ponder the subject the more names I cross off the potential list to write about. When I first thought about this topic a lot of names ran through my head but upon further reflection I decided they were more "black sheep" than "independent spirits". The bottom line is, I come from a group of ancestors who were conformists, not non-conformists!

As I mentally whittled my way through the list of possible candidates to write about for the 51st Carnival of Genealogy, I discovered there was one person who kept coming to mind and she was no "black sheep". I first introduced you to my maternal grandmother, Zofia MIZERA, in my article, Snapshot 1908, Galician Partition of Poland. But I didn't really tell you much about her besides where she was living in 1908. So allow me share with you why I think she embodies more "independent spirit" than anyone else on my family tree.

Zofia MIZERA immigrated to the U.S. from Poland in 1913 at the age of 20. The second oldest of 6 children, Zofia was chosen by her parents to go to America, get a job, and send money back to support the family in Poland. Not only did she have to leave all of her family and all that was familiar behind but she was expected to give up any dreams she might have had of marrying and having a family of her own. She was expected to work hard and support the family that was depending on her (and who really were struggling financially). A beau would only distract her from her purpose and had no place in her life.

Zofia did not travel with any family members, nor did she come to live with cousins or extended family who were already here. No, she traveled with another couple and an acquaintance from her same village. She lived briefly with them when she first arrived in Detroit but then rented a living space of her own. Keep in mind that Zofia had only ever lived on a small farm on the outskirts of a little village in rural Poland. Adapting to life in a big city in foreign country where she didn't speak the language couldn't have been easy for this young and relatively naive country kid.

Unlike many females who crossed the Atlantic to join husbands, brothers, fathers, or fiances who would then take responsibility for them, Zofia crossed the Atlantic in the role of sole supporter of herself and major contributor to the survival of her family. It was a daunting task for a young woman at time when a woman's role was primarily that of housewife and mother or perhaps doing some light farm labor like milking cows or feeding chickens. But Zofia's independent spirit saw her through.

She was a skilled seamstress and was able to secure employment as soon as she arrived in the U.S. Every month thereafter, Zofia sent $5 in a letter back to her family in Poland (That $5.00 in 1914 would equal just over $130 in 2020). Fast forward a couple years and we find that Zofia met and fell in love with Wincenty (Vincent). She wrote to her family back in Poland and shared the good news that she was getting married. Her mother wrote back to her and demanded that she not marry reminding her that it was her obligation to continue to provide for the family. Zofia was heartbroken but she didn't let her mother's tirade stop her.

Zofia's independent streak showed itself when she married Wincenty and wrote to her family assuring them that she would continue to send them money. Her parents had no faith in her (women didn't commonly work outside the home after they married in those days) and following her marriage they disowned her. They let her know in no uncertain terms that she was a disappointment to them and that they would have nothing more to do with her. Zofia, however, did not forget her family back in Poland. Just after she and Wincenty were married they bought a bakery which gave them a good income. She continued to write to her family every month with $5 in each letter even though her letters went unanswered. Eventually, after her first child was born, her parents realized she was not going to betray them and would in fact continue to provide support for them. They forgave her and all was well between them after that.

Zofia was not one to stay at home with her children while her husband toiled away over hot bakery ovens each day. She joined him at the bakery, working the front counter with her children in tow. When the bakery was incorporated she became an officer and was the official company treasurer. Once again, her independent spirit was showing itself. Mothers of small children typically didn't participate in corporate business back in those days. But Zofia did.

When in the mid 1920s Wincenty came home with a Model T, Zofia insisted on learning to drive it. At the time, very few people in their community owned cars. In fact, they were the only ones on their block to do so. It was virtually unheard of for women to drive automobiles back then. But that didn't stop Zofia. Once again, her independent spirit surfaced and she took to the road!

In the later years of her life, after her beloved Wincenty had died, Zofia developed diabetes. As a result of her condition she lost her eyesight. In spite of her inability to see the world around her, she lived independently in her home for several years. Zofia was not one who expected others to do for her. She believed in doing for herself. Her independent spirit served her well all through her lifetime and her family benefited from it as well.

As we in America celebrate Independence Day this 4th of July, I will remember not only the birth of our nation but the independent spirit of those who came to these shores looking not for handouts but for the opportunity to make a good living. And I will say a prayer of thanks for those who cared enough to share their bounty with others less fortunate, my grandmother included. 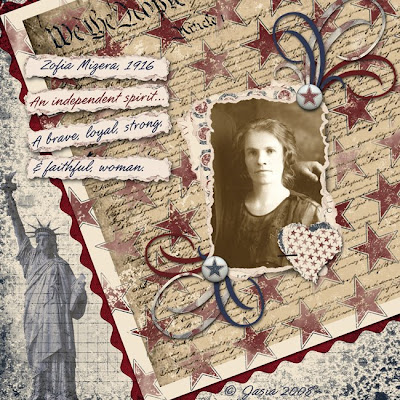 Scrapbook page composed of papers and elements from Americana by Jenn Kellams and Old Patriot by tigger.
Posted by Jasia at 9:51 PM