So many of the stores I remember from my childhood are gone. Most of them in fact. In some cases entire malls are gone. Shopping is a very different experience these days with outlet malls and online merchants in addition to strip malls and enclosed "super malls". I must admit that I do a great deal of my shopping online. But from time to time I like to reminisce about the stores I used to shop at.

Last December I participated in a Christmas Memories Carnival where I mentioned some of the stores our family used to shop at. It's sad to see how many of them are gone. Here are the ones I mentioned.

Federals Department Store on Ecorse Rd. in Taylor (Gone out of business)

Montgomery Wards on Michigan Ave. at Schaeffer Rd. in east Dearborn and sometimes the one in Wonderland Mall at Plymouth Rd. and Middlebelt Rd. in Livonia (Wonderland was an outdoor mall opened in 1959) ("Monkey Wards" closed the retail stores in this area in 2001. I understand the company was resurrected as an online catalog store in 2004 and was just recently auctioned off to a new owner in August 2008. The Wards building in Dearborn is still standing but will be torn down next month to make room for a medical complex. All of Wonderland Mall was torn down in 2004 and a new strip mall with a Walmart and Target are there now.) 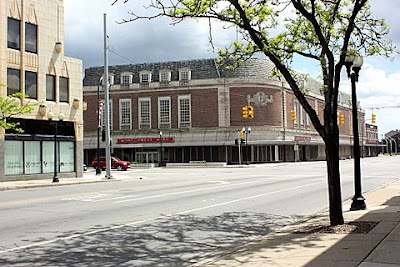 The Montgomery Wards store slated to be torn down Sept. 2008
Crowley's in Westborn Mall (Michigan Ave. at Outer Drive) in Dearborn (Crowley Milner and Company went out of business in 1999. Three of their stores were bought by Value City and those stores operate there now. The Crowley's store in Westborn Mall in Dearborn was torn down and replaced with a Kroger grocery store.)

Hudson's Budget Store (my Aunt Renee worked there) on Michigan Ave. at Greenfield in east Dearborn (J.L. Hudsons was bought by The Dayton Company in 1969 and became the Dayton-Hudson Corporation. The Detroit flagship store closed in 1983 and the building was demolished in 1998. In 2000, Dayton Hudson became Target Corporation and all the previous Hudsons stores became Marshall Fields stores. In 2006 they were acquired by the May Company and became Macy's Department Stores. At some point along the way, the Budget Store in Dearborn closed.)

Muirheads on Michigan Ave. at Military in Dearborn (Gone out of business.)

Sears Roebuck on Southfield Rd. at Dix Rd. in Lincoln Park (Still there!)

People's Clothing Store (my Dad's favorite store to shop at) on Michigan Ave. at John Daly in Dearborn Heights and on Schaeffer Rd. north of Michigan Ave. in east Dearborn. (Gone out of business.)

In addition to those stores, we also shopped at:

E.J. Korvettes (on Telegraph Rd. in Redford) (Gone out of business, I think the building is a Burlington Coat Factory store now.)

Arlan's (behind the Sears store in Lincoln Park) (Gone out of business.)

Jacobson's (on Michigan Avenue in Dearborn) (Gone out of business, the building was torn down and the area is currently being redeveloped.)

My favorite places to shop were right in my own neighborhood. Westborn Mall was about 1.5 miles from my mom's house. It used to have the following stores: Crowleys (department store), Alexander Polen (meat market), Sally's (gift shop), Hughes and Hatcher (men's clothing), Winkelmann's (women's clothing), Bakers (shoes), Sanders (confectionery, and home of the best hot fudge cream puff you ever tasted!), Marianne's (women's junior clothing), S.S. Kresge ("dime store"), Cunninghams (pharmacy), Good Housekeeping (cleaners), and Wrigleys (grocery store). I think there may have been a bank in there too. Of these stores, none are still there. The Sanders Company went out of business but has been resurrected in other metro-Detroit areas. S.S. Kresge became Kmart Corporation but no longer operates the "five and dime" stores. Sally's gift shop was the last hold out. They were forced out of their location in 2007. 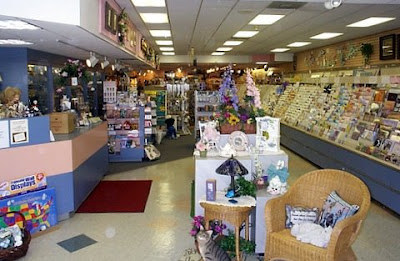 The last two hold-out stores in Westborn Mall, Sally's and Alexander Polen Meats. Photo from 2005.
The interior of Sally's Gifts from 1997.
One special store that I haven't mentioned yet holds a special place in my heart. There was a little store in my neighborhood, just a half-block down and a short block over from the house I grew up in. The store was officially, "Sunnyside Market", but everyone in the neighborhood called it, "the corner store". This was nothing more than a little "mom and pop" grocery store, and I mean little. It was no bigger than your average 7/11 convenience store but it offered so much more. It was cramped of course but you could get just about anything there you'd find in a full-sized grocery store. It had a fresh meat counter rather than prepackaged meats. It had a produce section, canned goods of all sorts, laundry detergents, baking needs, breads and baked goods, dairy, frozen food, a magazine rack, and best of all a candy section behind the front counter.

Mrs. Moceri was the sentinel who manned the cash register and dolled out the candy. Hard candies, Dum Dum suckers, Bazooka bubble gum, and the thick pretzel rods (which stood in a round container on the counter) were a penny a piece. The full-size candy bars were a dime. Chuckles, Good 'N Plenty, Slo-Poke suckers, Snaps, a pack of gum, and a roll of Lifesavers were a nickle each. Mrs. Moceri was friendly to children when there were adults within hearing distance but if you happened to wander in when the store was empty she'd give you a scowl, ask what you wanted, and tell you hurry up and decide. Then she'd stare intently at you until you did.

A guy by the name of Tommy worked the meat counter. I'm thinking Tommy was Mrs. Moceri's son but I don't know that for sure. Now Tommy was just the opposite of his mother. When adults were around he was all business. But if the store was empty he was quick to hand out a free Dum Dum sucker to any kids who happened along (when his mother wasn't looking of course!). He was always smiling and never hesitated to engage the neighborhood kids in a conversation. Everybody like Tommy. Only adults liked Mrs. Moceri.

Right out front of the corner store was a U.S. Mail box, the old red and blue kind. Back in those days people didn't leave outgoing mail in their home mailboxes like they do nowadays. When my mom needed to send something via the U.S.P.S. she'd always send me over to the mailbox at the corner store and give me a penny to buy something while I was there. I almost always bought a pretzel rod (you couldn't buy anything chocolate for a penny or you know that's what I would have gotten!) but sometimes I got a Dum Dum sucker (watermelon was my favorite flavor :-). 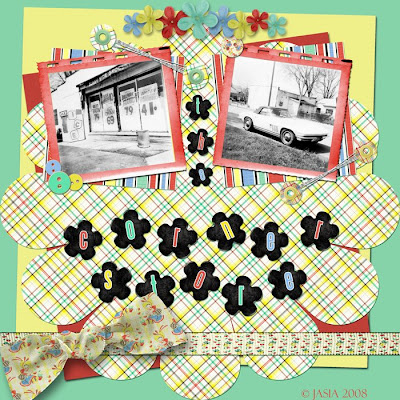 The two photos in the scrap page above aren't very good photos of the corner store but they're the only ones I have. I wasn't even trying to photograph the store in the picture on the right. I was actually photographing the hot Corvette in the foreground but the back of the store is clearly visible in the picture.

I don't know just when the corner store went out of business. The above photos were taken for a high school photography class assignment in 1972. I'm thinking the store was around until the 1980s but I'm not sure about that. I should look it up in a city directory the next time I'm out that way. What I wouldn't give to see Mrs. Moceri's scowl just one more time. Of course I'm an adult now so I probably wouldn't get to see it!

Scrapbook page created with the kit "Happy Kitchen" by Susan Darter on the Raspberry Road blog.
Posted by Jasia at 8:30 PM