Some of the best stories that will be incorporated in the published account of my family history came from newspapers. I only wish I had more of them! I had intended to share an article about my Aunt Mary Jane with you for the 57th edition of the Carnival of Genealogy but instead I'm going to share two very recent acquisitions from my newspaper clipping files. These two articles were shared with me by my very dear "new" cousin, Mary Ellen. Both articles are about her grandfather (the husband of my grandaunt), Barney Ronowski.

Just a bit of background about Barney to begin with. Bronisław Ronowski, aka Barney, was born on August 31, 1890 in the city of Detroit, Michigan. In 1907, at the age of 17, he began working for the Polish Daily News as a type setter. He married Josephine Lipa on June 12, 1917 at Sweetest Heart of Mary Church, also in Detroit, Michigan, and they had two daughters (one is Mary Ellen's mother Frances) and 9 grandchildren. Barney died December 31, 1979 at the age of 89. Here then is the first of two articles featuring my granduncle, Barney.

This article appeared in the Detroit Free Press on May 16, 1954. It honors the 50th anniversary of the Polish Daily News and has a great photo of Barney Ronowski. 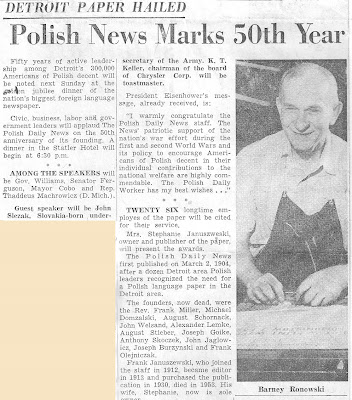 This second article appeared in the Detroit Free Press as well and is about Barney's 50-year career with the Polish Daily News. It appeared on January 25, 1958 following his retirement.

(Click image to view larger)
I don't recall meeting Barney in person though I certainly could have when I was a child. Reading these wonderful articles about his career at the Polish Daily News makes me feel closer to him than if he was just another name on the family tree. He certainly had a wonderful work ethic and was a man to be admired for that if nothing else. But of course there was more to the man than his job. I have Mary Ellen and her mother Frances to thank for introducing him to me with photos, stories, and these terrific newspaper clippings. I don't know if I would have ever found these articles if not for them. The Detroit Free Press online archives only go back to 1982 so I wouldn't have found these articles doing a search on the freep.com web site. And I didn't know Bronisław went by the name of "Barney" though I might have figured that out if I'd found the articles some other way.

I want to send out a special thank you to Mary Ellen and Frances for sharing these articles and additional stories about Barney. I'm just thrilled to learn about him and all the rest of your family!
Posted by Jasia at 4:15 PM