I have to admit that until this year's Presidential campaign swung into high gear, I never gave a thought to how or if my ancestors exercised their right to vote. But once the idea was born, I found myself pondering it often. I wondered what voting meant to them and if they were Republicans or Democrats, or possibly supported one of the minor parties. The next thing I knew, I was wondering who the candidates were that they might have voted for and what the issues of the day were. Here's what I came up with.

My paternal grandmother's parents, the Lipas, came to the U.S. in 1881 but to the best of my knowledge they never became naturalized citizens. My great grandmother died in 1912, well before the women's suffrage amendment was passed in 1919. She wouldn't have been able to vote even if she had naturalized.

My paternal grandfather immigrated to the U.S. in 1905 but never became a naturalized citizen. He has no voting record.

My paternal grandmother, Karoline Lipa Lasky, was born in Detroit so she was a citizen by birth. She married my grandfather, an alien, on January 28, 1907. On March 2nd of that same year, the U.S. Congress passed an act that decreed that a wife's citizenship status was determined by the status of her husband. So all U.S. born women citizens who married alien men after that date lost their citizenship status. Since my grandmother married a few weeks prior to the March 2, 1907 act, I presume she did not lose her U.S. citizenship. Assuming that was the case, she would have been eligible to vote in the first Presidential election after the women's suffrage amendment passed. That would have been the 1920 election, Warren G. Harding vs James M. Cox. I don't know if she actually voted or not but I would like to believe she did. 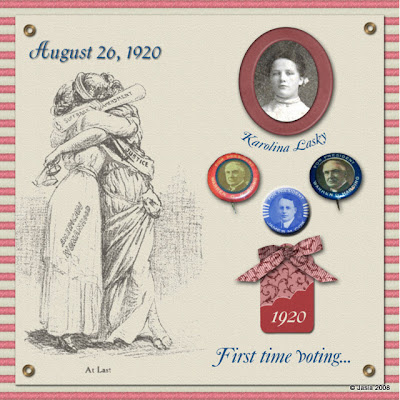 My maternal grandfather, Vincent Lisowski, came to the U.S. in 1912 and became a naturalized citizen on November 18, 1935. So the first Presidential election that he would have been eligible to vote in was in 1936, Franklin D. Roosevelt vs Alf Landon. I don't know if he actually voted in that election or not but most new citizens looked forward to exercising their right to vote. I believe he did as well. I know my mom remembered that her father was an active supporter of local politicians and that he and my grandmother attended several fund raising dinners. 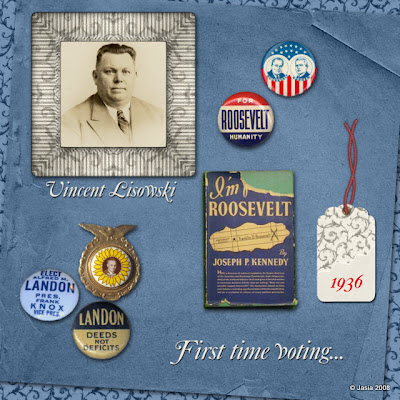 My maternal grandmother, Sophia Mizera Lisowski, came to the U.S. in 1913 and became a naturalized citizen on September 10, 1940. The first Presidential election that she would have been eligible to vote in was in 1940, Franklin D. Roosevelt vs Wendell Willke. That would also have been the first election for my mother who turned 21 years of age in 1939. In my mind, I picture my mom and grandmother going off to the polls together for the first time though in reality I have no idea if they did. (I wish I'd thought to ask my mom about that!) 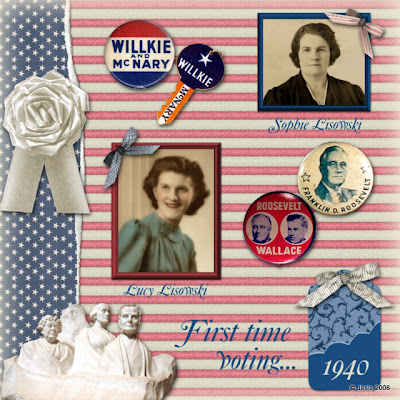 It was interesting to look up who was running in those elections and see some of their campaign buttons. I still don't know if my grandparents voted but it was fun to imagine that they did. Oh how I'd like to see a polling list from any of those elections to see if their names were included!

In My Family's Voting History, Part 2 I'll share with you some of my memories from past elections.
Posted by Jasia at 10:16 PM