My dad came from a large family, having 4 brothers and 6 sisters. The sisters were a tight knit group who lived near each other and socialized together all of their lives. Like most siblings, they had their share of squabbles. But, no one held a grudge for very long. They watched each others children, attended church functions together, played cards, shopped, joined the Polish Falcons, and visited with each other frequently. 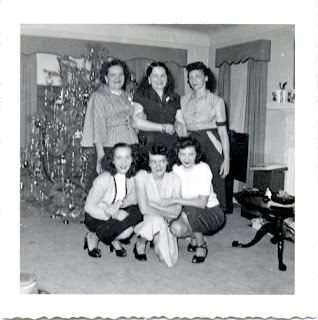 These 6 aunts of mine were quite a set of characters. Some of them I knew better than others and I cherish my childhood memories of them all. To begin with, I'd like to tell you about the oldest of the sisters, Annie.

Anna Laska was born January 31, 1911 on the west side of Detroit (Michigan) and was baptized February 2, 1911 at her family's parish, St. Francis D'Assisi. She was named for her godmother, Anna Lipa, who was her mother's sister. Her parents, Joe and Carrie, lived on 35th Street just a block from St. Francis Church and school. Annie had two older brothers, Stanley age 3, and Walter almost 2.

I don't know a lot about Annie's childhood except to say that her family struggled economically as did most Polish immigrants at that time. It is my understanding that she attended St. Francis grade school but I don't know if she went on to high school or not. I know that she did not graduate from high school. It was expected that she would work outside the home as soon as she was able (probably age 12-14) and help support the family. I don't know what kind of work would have been available to her back then but several photos of her in the late 1920s show her to be quite well dressed. Annie would have been 18 years old at the time of the stock market crash of 1929 and may have had difficulty finding and keeping work during the ensuing Great Depression of the 1930s. But she had a lot of friends and was very active socially.

In 1938 Annie married Chester Troczynski, a boy from her neighborhood whose parents owned a small grocery store. I believe they were married at St. Francis but I don't have documents confirming that. In 1939 she gave birth to a son, Chester Jr. She had at least 2 miscarriages after that but Chet was her only surviving child. Annie, Chester, and Chet lived in Detroit for a time then eventually moved out to the suburb of Garden City. Chet grew up there and graduated from Garden City High School. Some time after that Annie and Chester moved to Dearborn and Annie lived in their house on Pardee Street until she died (brain cancer) July 7, 1986. She was survived by her husband Chester, son Chet, daughter in law Jan, and two grandchildren, Christine and Michael. She is buried at Sacred Heart Cemetery in Dearborn, Michigan.

Annie's house in Dearborn was walking distance from my parents' house so we visited her quite often. She was quite fond of dogs and Chet had a Chow when he was growing up. Later, Annie had a couple Chihuahuas and would breed them from time to time. We got a puppy from her once and named him Chico. I think I was 6 or 7 years old at the time. My mom didn't like animals, especially in the house. So we didn't have Chico for long. I don't remember what happened to him. I think we gave him back to Annie. In any event, I will always remember playing with her Chihuahuas when we visited.

Annie was always nice to me. I remember her giving me pop and ice cream bars when we visited. I also remember feeling sorry for her because she would often complain that she had no money. My dad was always quick to open his wallet and give her some. She didn't die poor though, so she must have been a great saver.

Chet is a favorite cousin of mine and has been very helpful and cooperative with my genealogy research. His children have married and he has 3 grandsons. I know Annie would be very proud of her grandchildren and great grandchildren! 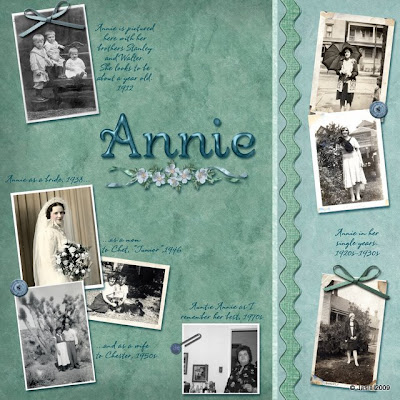