A Gallery of Swimsuit Pictures

You know how some things sound better in theory than they are in reality? Sure you do. It's something that's happened to all of us at one time or another. Well, I'm having my turn at this phenomena.

I had what I thought was a great idea for the current edition of the Carnival of Genealogy, you know, the swimsuit edition. My idea was to create a gallery of family swimsuit photos and photograph them as my submission to the COG. The best part is that I'd not only end up with a unique submission to the COG but I'd have a wonderful art display on the wall in my beach town condo. :-D

I started off by going through zillions of family photos looking for swimsuit pics. That took forever but eventually I selected 14 photos to start my gallery with. I uploaded them to Costco.com and had some printed as 5x7s and some as 8x10s (all were done as black and whites).

Then I set about shopping for frames, some 8x10s and come 11x14s, and mats to go with them. I didn't want all the frames be the same because that would look way to repetitious and formal, so I had to find a variety of frames without spending a fortune. I had a few frames at home that I wasn't using so I incorporated those too.

Then I spent oodles of time deciding which photos to put in which frames with which mats and actually framing them.

I knew I wanted to hang the pictures on the stairway from the living room to the upstairs hallway but deciding on the order of the pictures took another little chunk of time.

And then came the actual hanging of the pictures. Thankfully, my dear husband was there to help me out with that part. It's not easy to hang 14 framed pictures, all level, with their sides touching, at the right angle, LOL!

The result was a very fun gallery of pictures! :-) I really like the way it came out and so does my husband (he's always a fan of girls pictured in bikinis!). All that was left to do was to photograph the gallery for the COG... and that's where the problems came in.

You see, in my mind the photo showed all the pictures clearly, none distorted, no reflections-on-glass issues, no color mutations, just a nice photo of a gallery of pictures. But in reality, I couldn't get even one decent photo of my gallery, LOL!!! After all that time and money invested in this COG post I don't have a single good photo to share. Every picture I took had at least one glaring problem... couldn't get all the pictures in from an angle where you could see them, too much glare from the skylight at the top of the stairs, hilarious distortion because of the angle I had to try to shoot from, bad, bad, bad color... the list goes on and on.

If I'd had more time or better equipment (my tripod and flood lights were at home and we finished hanging the pics just before we had to leave Sunday evening) I could have gotten better results but instead I have an embarrassingly poor photo to show for my efforts. And this is the best of the bunch! 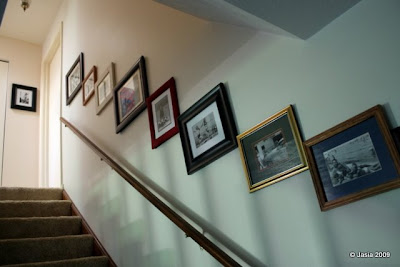 Pretty sad, huh? I couldn't get all the pictures in, the angle looks unnatural, you can't see the details of most of the photos, the colors are a mess, what's with all those shadows? Yeesh!

So as not to have a totally worthless COG submission, I've decided to pull one photo from my gallery and share it here. This is a picture of my father in law with his two small sons, circa 1963, at a beach somewhere in Ohio. 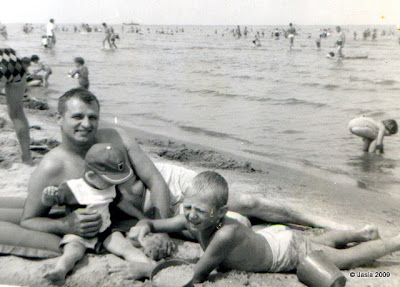 What's that you say? You wanted to see the girls in bikinis? Well, you'll just have to stop by for a visit to see those photos! ;-)
Posted by Jasia at 12:59 PM