My ancestors all came from Poland. Yep, that's right, all of them.

Even though Poland is largely an agrarian society, it was still a bit of a surprise to me to learn that all of my ancestors were farmers. Yep, that's right, all of them.

It took me a while and a good many dictionaries and translation guides to realize that fact because there are so many terms used in Polish vital records to describe "farmers". Here's a list of Polish terms for "farmers" that I've run across: [ ]= Latin equivalent
Whew! Ya see what I'm saying here? The Poles have more terms for farming than the Eskimos have for snow! (The Eskimo thing is a myth by the way.) And this list doesn't include the words used in the German and Russian partitions of Poland.

Most of my ancestors came from the Austrian partition of Poland but one branch was from the Russian section. The terms I've seen most often are actually the Latin ones, recorded in Catholic parish baptismal, marriage, and death records.

I've often wondered what types of crops my ancestors planted, how many and what types of animals they owned, and how much land they possessed. I'm sure there were records of these things at one time but I have no idea if they still exist, where they might be held, or if public access is allowed. I would be an Ancestry subscriber for life if those folks could find and publish these sorts of records from my family's ancestral villages in Poland!

Even without more specific records, it's obvious that my family's ties to the good earth are strong and go back as far as records were kept. Here is just one example of occupational notations on the baptismal record of my great grandfather, Szymon Lipa, born on October 2, 1843 in Bobrowa, Poland.

You will notice under the column "PARENTES", "PARENS ET CONDITIO EJUS" the last word is "rusticus" as is the last word in the column "PARENTES", "MATER". This tells me that my 3rd great grandparents, Joannis (Jan) Lipa and his wife Sophia Łanucha Lipa were tenant farmers. To the right of that under the "PATRINI" (Godparents), "CONDITIO" column we see the terms "inquilinus" (a farmer who lived with another) for Mathis Skowron (Godfather) and "hortulanus" (a peasant farmer who owned a house with a small piece of land and some farm animals) for Anna (Godmother), wife of Joannis (Jan) Grzyb.

I only have one photo of a relative in Poland tilling the good earth. This is Adolf and Krystyna Mizera at their farm near Wojnicz, Poland. Photo taken between 1976-1998. 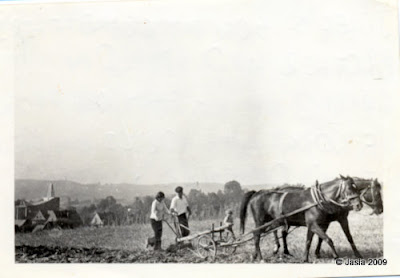