I've been playing around with Twitter for a while now. (I'm also back on Facebook but that's another story.) I can sort of see why people like Twitter although I'm not a big fan of it the way some people are. For me it's a way to keep up with my GeneaBlogger buddies who now do as much or more posting on Twitter and Facebook as on their blogs. All the off-topic stuff that used to get posted on the Geneablogs now gets posted to Twitter and Facebook instead. I'm talking about reviews/referrals to other interesting sites, "what I've been up to" updates, photos, reminders, etc. I must say that I preferred when all that stuff could be found on the blogs themselves so that I could read about it all in one place... my feed reader. But I guess I'm a dinosaur in that way of thinking. I really hoped that Facebook and Twitter use among my Geneablogging friends were just fads that would run their course like memes and awards do. It's pretty evident now that that's not going to happen. So I've finally given in and am going with the flow, "if you can't be 'em, join 'em".

Twitter presents a couple challenges for me. 1.) I'm not a concise writer. Never have been, never will be. It's a struggle for me to confine myself to a 140 character post... sort of takes all the flavor out of a message and just leaves you with a skeleton. I've never been a fan of skeltons. 2.) Posts are so frequent they pose a distraction for me. If I read them on my phone (my preference) my phone is forever dinging with incoming messages. If I leave them to read once or twice a day like I read my feeds it becomes essentially just another feed reader but for short messages.

Challenge 1 will probably work itself out with time. If "practice makes perfect" I'll get better at concise writing as I do it more. 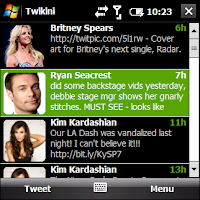 that shows me my friend's tweets and allows me to reply, post pics, shorten URLs, share my location, and more all from my phone. It was easy to download and install and it hasn't crashed Windows Mobile even once! :-) It's light-years better than Twitter's own mobile site. And in the couple of weeks I've been using it I've come to depend on it to let me view tweets numerous times a day when I'm on the go. That allows me to focus on my work when I'm at the computer and treat myself to tweet reading when I walk away for a break. :-D

So now I'm a Twitterer, username: imjasia. But be forewarned if you are looking to follow me, I don't tweet much about genealogy. Mostly I tweet about my life apart from genealogy. Same is pretty much true for my postings on Facebook.
Posted by Jasia at 9:02 PM