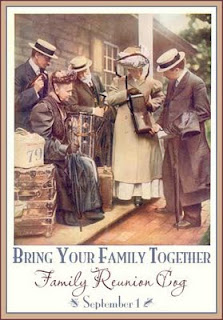 It was a birthday party/family picnic held in a little park in a little town in Michigan on August 1, 2009. The weather was beautiful, at least when the picnic started.

For me, it was so much more than a family picnic / birthday party. For me, it was a family reunion. I'd just found this branch of my family in the last year and this was the first time I had the chance to meet them all in person. And what a great bunch they were! Everyone was so friendly, coming up and introducing themselves to me and my husband. I didn't feel like an outsider even for a minute.

Since this was not planned as a family reunion, there were no matching t-shirts, genealogy charts, or old photos being passed around. There were a few conversations about the old days but mostly the conversations were introductions... a chance for us to get to know one another. I found it fascinating to put faces and voices to what had only been names on the family tree.

Another thing that I found interesting was looking for common family traits. It was surprisingly easy for me to distinguish most of my second cousins from their spouses. The family resemblances were strong.

As soon as everyone arrived, we all joined hands and said grace. Then the food was set out and we filled our plates... chicken, salads and side dishes, and desserts. We were all asked to bring a dish to pass and beverages for ourselves. This worked out well. The food was yummy and I'm sure no one went away hungry.

After dinner we socialized with each other. We sang happy birthday to the birthday girl, Frances, my first cousin once removed (age 90!). She opened a few gifts and cards but there were no elaborate gifts given. This was not that sort of party.

I had a chance to speak for at least a short time with each of my second cousins and with Frances herself. I enjoyed getting to know my cousins and many of their children and grandchildren who were also there.

The weather that was so lovely to begin with turned dark and threatening shortly before 2pm. We quickly got people together for some group photos and finished just in the nick of time. The clouds let loose with wind and rain which sent everyone scampering for cover. At that point some people were talking about leaving and I myself had to leave by 2:30pm for another engagement. So we said our goodbyes and I left with a smile on my face and the same sort of feeling I got as a child when the fun had to end but I wasn't ready for it to do so... like I'd be missing out on something wonderful.

The time together was too short, only a couple hours. I could have spent the whole day with this family, my family, and still felt like I didn't want it to end. My late father's birthday was August 5th, just four days after this party. France's mother was my dad's Godmother. It all sort of ties in. My dad was very close to his family and I know he would have been pleased to see us all together. It made me feel close to him.

And I have to thank my cousin ME for inviting me to be a part of that wonderful day. It warmed my heart and soul to be with my Lipa family.

******************************
I have never been to an "official" family reunion. However, I have twice now been to birthday parties that were hosted specifically with getting-the-family-together in mind. I think the reason the families on the various branches of my family tree have not held formal family reunions is because the families all lived right here in the immediate vicinity of Detroit, Michigan or we lost touch with them. With so much family living in such close proximity, every Holy Communion party, wedding, and funeral essentially was a reunion of the family. Going back 25, 30, 40+ years... you had to go to all these events or you'd better have a darn good reason why not. Family was family after all and you were expected to attend all family functions. Now a days, things are much different. The family has begun to spread out and attendance at family functions is definitely optional (and not nearly as common as it once was). Perhaps one day we'll feel a need for an official family reunion.
Posted by Jasia at 6:56 PM