PGS1 and PGS2, What They Mean to Me and You

To Join or Not to Join? That was the question I asked myself back in the late 1990s. I wondered if it was worth the $20/yr dues to join the Polish Genealogical Society of Michigan (PGSM). Would I learn anything helpful? Would everyone there be old and cliquish? Would I ever go a meeting? I debated for only a short time before I filled out the application and sent in my check. And the rest, as they say, is history.

The PGSM was the first of only two genealogical societies I've been a member of. I belonged to the PGSM from 1999-2005 and the Polish Genealogical Society of America (PGSA) from 2003-2008. I am not officially a member of a genealogical society at present but I will be as soon as my membership paperwork gets processed at PGSM. Both of the organizations I belonged to were established over 25 years ago, both serve those researching their Polish ancestors, and both have a lot to offer. The PGSM focuses primarily on the Detroit area but welcomes members, speakers, and journal articles from all over Michigan, the U.S. and Canada. The PGSA, which is located in Chicago, Illinois, has a broader focus with correspondents in Poland as well as the U.S.

The PGSM has 5 regular meetings a year, 1 joint meeting with the West Side Detroit Polish American Historical Society (WSDPAHS), and a one-day seminar each October. They have no place to call "home" choosing instead to rotate the location of their meetings around metro Detroit. They have a journal called Polish Eaglet which is published (traditional printing only, electronic distribution not offered) three times a year. 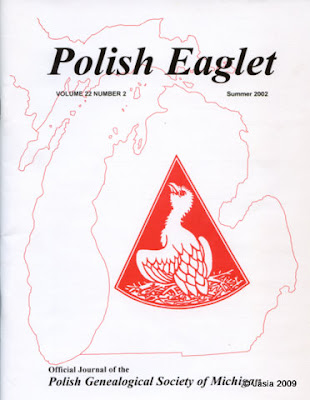 The PGSA has 4 regular meetings a year, a three-day conference each September, and sponsors "Genealogy Saturdays" the third Saturday of every month at the Polish Museum of America (PMA) Library. While they have no "official office", the home base where they receive mail, have their repository and meetings is at the Polish Roman Catholic Union of America (PRCUA) building, 984 N. Milwaukee, Chicago, ILL. They have a journal called Rodziny which is published (traditional printing only, electronic distribution not offered) three times a year. 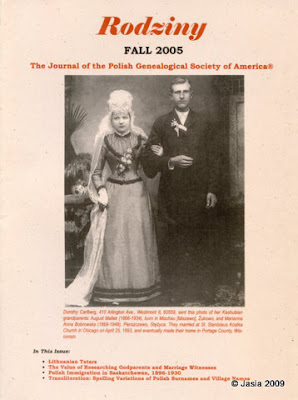 Now that the business end of things is taken care of, let me tell you about why I joined, what I got out of my membership, and why I left these two organizations.

My Histories With GenSos
I joined the PGSM in the early years of my genealogy research to learn more about what resources were available to me in the Detroit area and to get some tips on how to find the location of my ancestral villages in Poland. I wasn't looking for friendship, volunteer involvement, or to become an "active" member (meaning I wasn't planning to attend meetings, volunteer my services, or serve on the board). I was only intending to pay my dues and receive whatever newsletters and journals were available. And for the first year or so that's all I did.

Then one day the word was put out that the PGSM needed a new webmaster. I thought about it for all of 5 minutes and decided to offer my services. I figured, what the heck? I can do that remotely from home when I have the time. They took me up on my offer and I soon came to realize that they had no real plan for the web site. That left it all up to me. So I took the ball and ran with it. The site had 7 pages when I inherited it in September 2001. 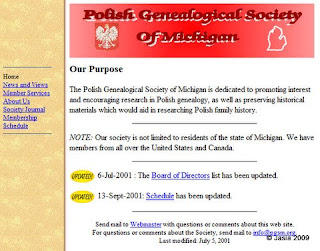 I redesigned it and launched it with 10 pages in November 2001. 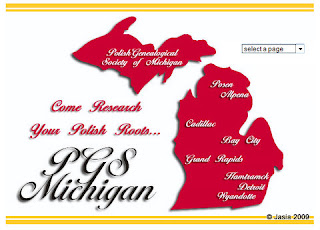 In the course of the next couple years I developed it to a full featured site with a lot of content, including a list of all the Polish microfilms available at Detroit area Family History Centers, a complete index of all the articles from the past 24 years worth of the society's journals, calendars, a list and profile of all of Detroit's Polish Catholic parishes, online polls, featured articles, a bulletin board, a store with PGSM merchandise that I designed, and my own editorials in addition to all the basic information that was available on the site when I initially took it over. 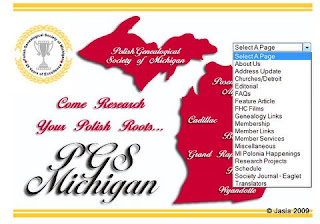 Somewhere along the way, after Bob Postula was elected President of the PGSM in 2001, I was asked to join the Board of Directors as a "Director at Large" (which meant I served at the pleasure of the board, not in an elected position). I was very, very hesitant about joining but Bob was very supportive and encouraging. So I joined the board and started going to all the board meetings and membership meetings. I made comments, suggestions, and friends. I felt valued and appreciated. I knew my efforts made the organization better.

And then things changed, as they will when new officers are voted in and the old ones out. The views of the new administration and mine did not agree. I resigned from the board but stayed on as web master until September 2005. Shortly after I let my membership lapse. By that point in time, my research had gone well beyond the beginner stage to almost complete. Most of what the PGSM had to offer was geared to beginners. So it was time for me to move on. I'd given as much as I'd gotten from the organization. I very much enjoyed the friends I'd made and all I learned about Polish genealogy research. It was a very worthwhile, educational, and enjoyable experience for me.

I joined the PGSA in 2003 in search of more Polish genealogy research tips. I had no intention of becoming an "active" member and I never did more than send in my dues (I did throw my hat in the ring at one point to be their web master but we couldn't come to terms). In 2008 I let my membership lapse. It was my way of protesting the lack of electronic distribution of their journal.

I am a big supporter of genealogical societies. I think they are marvelous inventions and they have a lot to offer. Besides all that I learned about Polish genealogical research, I met many wonderful people, several who I am still friends with. Speaking from experience, you'll get more out of your membership if you put more into it. I heartily recommend joining a genealogical society and if you live close enough to be actively involved I'd encourage you to do that too!

I have written a series of articles on the Declining Membership in Genealogical Societies, a trend that is all too common these days. I believe in and advocate for necessary changes in the way societies operate. I welcome your comments.
Posted by Jasia at 4:45 PM