Remembering An Aunt With Many Names

Genevieve "Gee" Laska was born on November 25, 1916 in Detroit. Her parents were Jozef and Karolina "Carrie" Laska. Jozef was an immigrant from Poland who arrived in America in 1905. Carrie was born in Detroit of parents who immigrated from Poland in 1881. Gee was the 6th of 11 children for Jozef and Carrie, making her the middle child of a whole pack of kids! My dad, born in 1914, was #5 so the two were close in age.

The family was living at 4181 35th Street in a two-family home they owned in the west side Polish neighborhood of Detroit when Gee was born. The home was next door to a "filling station", across the street from a funeral home (Cylkowski), and a stone's throw from St. Francis D'Assisi Catholic Church. The family attended St. Francis, the children all went to school there, and it is there that Gee was baptized on December 3, 1916. Her Godparents were Michael Lipa (her mother's brother) and Genowefa Tabaczynska, aka Genevieve Laska Tabaka (her father's sister). Gee was named for her Godmother, a common custom in the family. Gee made her First Holy Communion at St. Francis in 1925. 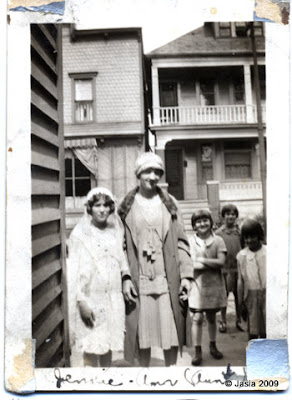 Here's Gee in her First Holy Communion dress on the left. Standing next to her is her Aunt Anna Clara Lipa Lapinski (her mother's sister). They are standing next to the family home on 35th Street. I don't recognize the younger children to the right in the picture. 1925
I don't have much information about Gee as a child, or any of the other children in the family for that matter. Unlike my mom and her siblings who often told stories about what life was like when they were growing up, my dad and his siblings never talked about "the old days". A few years ago I asked my Aunt Mary Jane, the youngest of the 11 children, why that was. She said "Life was hard, nobody wants to remember those days. We lived hand to mouth. I was the only one in the family who graduated from high school and that was only because your dad paid for my tuition (at St. Hedwig High School) and bus fare." So I can't tell you much about Gee's younger years. 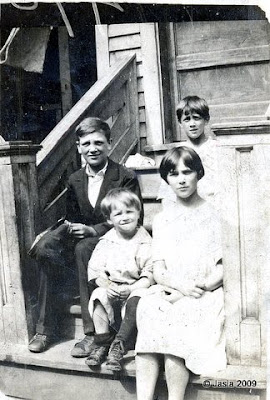 Here's a picture of Gee (seated on right) with 3 of her brothers, Eugene next to her, Eddie behind her, and Joe (my dad) in the dark suit. c. 1927
On May 28, 1939, Gee married John Hnidy at St. Francis Church. Unfortunately, I have no wedding picture to share with you. Gee and John were married for 59 years when John died on August 21, 1998. They never had children. Gee was a wife and homemaker and never worked outside the home as far as I know. I remember Gee as kind and quick to smile. She loved her 19 neices and nephews and treated us like we were her own children, correcting our manners, scolding us when necessary, and offering lots hugs. When my parent's home caught fire and was inhabitable for a few months, Gee and John took our family in. Gee was close with her 5 sisters, I have several pictures of them together over the years. 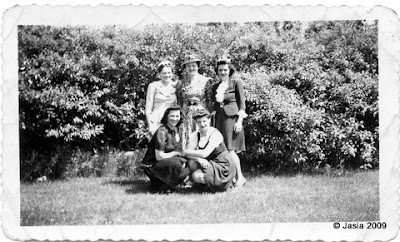 Here's Gee (dark dress in front) with her sisters Florence, Ann, and Ceily, and her Aunt Anna Lipa Lapinski. I don't know when this picture was taken, 1950s? 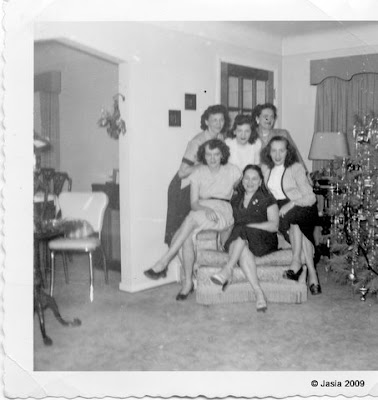 This picture shows all the sisters, Gee is on the left in the back row. It was probably taken in the late 1950s or early 1960s at Christmas.
Gee suffered from dementia and her last years were spent in a nursing home in Dearborn Heights, Michigan, the same community where she and John lived for most of their married lives. She died April 19, 2007 at the age of 90 and her body was cremated. There was no funeral for her and no obituary or death notice written for her. Sad.
Posted by Jasia at 9:50 AM