Randy challenged us to make a calendar using our genealogy database software of choice and post the January page. Well, this was a really easy challenge for me because I use my Legacy software to make a calendar every year. It took me just a few minutes and there was no learning involved. 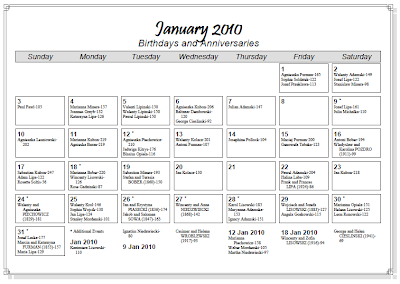 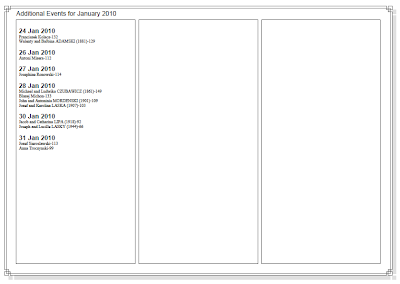 I'm not especially fond of the calendar that Legacy creates. Templates often frustrate me because of the lack of flexibility. I would have preferred to make the title much smaller, on one line, eliminate the spaces between the boxes, and make each box larger. I really don't like that my family events are continued on to a second page and I would like to be able to play with the layout so as to fit them all on one page. But hey, this is better than creating a page by hand and having to enter the info for each event one by one!
On this date, January 30, in my family history there were a number of significant events. Today would have been my parents' 66th wedding anniversary and the 92nd anniversary of the marriage of Jakob Lipa (my 1st cousin twice removed's wife's aunt's husband's brother) and his third wife Katarzyna. It was also the 151st birthday of Marianna Opiela (my 1st cousin 3 times removed); the 125th birthday of Marianna Lisowska (my second cousin twice removed) who only lived a little over a month; and the 122nd birthday of Leon Ronowski (my grandaunt's husband's brother).
Happy Anniversary and Happy Birthday to all!
Posted by Jasia at 9:09 PM