Sometimes looking back makes me happy. I love to remember my mom and my dad, my brothers when they still lived at home with us, my high school years, holding my kids when they were babies, visiting my grandmother and plunking away on her piano, Christmas, Easter, and summer vacations. But looking back isn't always pretty. Sometimes it's littered with trash, it has crumbling walls and broken windows, and it's hard to imagine the glory days. 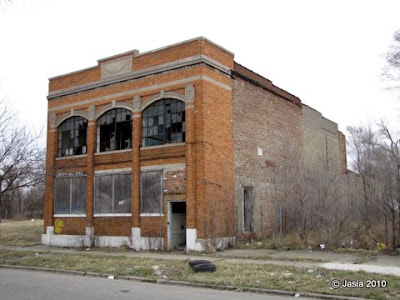 We recently took a drive to visit the neighborhood where my grandparents used to live on the west side of Detroit. I don't go there often because it's dilapidated, dirty, and dangerous. Some neighborhoods in the city are still pretty well intact. This isn't one of them. In this neighborhood there are more empty lots than houses on every block. Most of the houses that are still standing, aren't occupied. 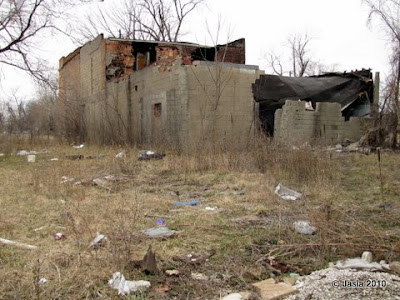 The streets are empty. No children play outside. Rusted out old jalopies outnumber cars that actually run. The sidewalks are cracked and uneven. The overgrown grass has made them much narrower than they were intended to be. There are all kinds of "old"... the pretty, quaint, old of European villages, the charming old of the well maintained historic buildings at Greenfield Village, the character old of a countryside barn that could stand a coat of paint. And then there's the old, ugly neighborhoods of Detroit that aren't quaint, and have no charm or character. They haven't aged well. They're grey and scraggly even on the sunniest day. They are sad and depressing. They leave you cold. 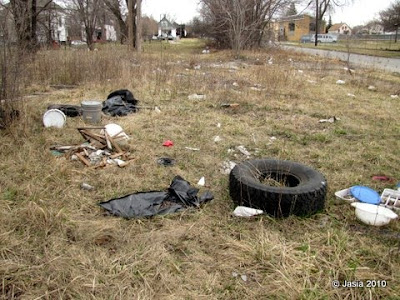 The lawns haven't been tended in decades. They're strewn with carelessly discarded items that nobody wants. It's a dumping ground for things nobody cares about, on property nobody cares about, by people who don't give a damn what kind of slum they live in. There's a story here and it's one of neglect, apathy, and hopelessness. 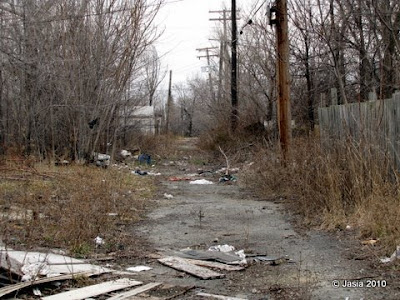 The alleys that once provided access to garages and carriage houses are now overgrown, littered, and broken. The gleeming cars of the Roaring Twenties with running boards and enough chrome to blind you couldn't make it down them anymore. They no longer serve a purpose. They are just a catch-all wasteland. 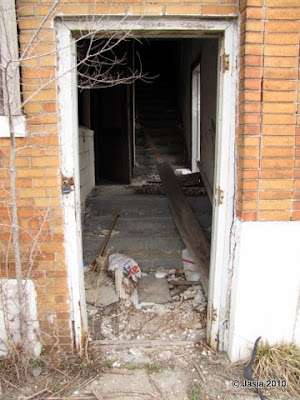 When you look in the front door of a building you see that the inside is just as abused and neglected as the outside. Entrance ways that once welcomed family, friends, and neighbors, are now cluttered with shards of glass, rotting boards, and refuse. They are stark and forlorn. 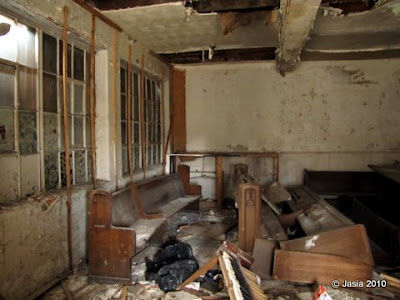 The insides were long ago stripped of anything salvageable and what's left has been vandalized for no good reason whatsoever. The electical wiring has been ripped from the ceilings and walls and sold as scrap metal to support someone's drug habit. The walls are barely standing, the paint that's left is pealing, the windows that aren't broken are boarded up. There are no rats inside because there is no food to lure them. It's barren. 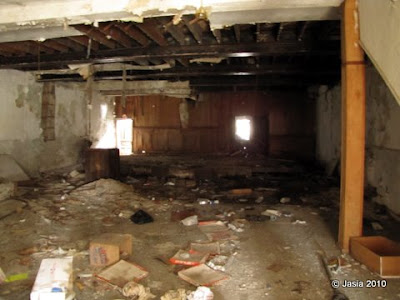 The ceilings are fallen in. The pipes that once carried fresh, clean, water throughout the structure were long ago sold as scrap metal too. When you look at this kind of devestation you wonder what was going on in the minds of those who destroyed it. And then you think, "No, I don't want to know". 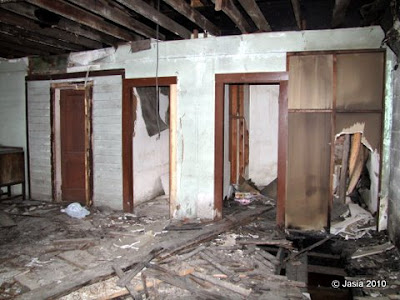 Gaping holes in the floor prohibit you from wandering beyond the doorway. It isn't safe to walk through this place. At one time this was a viable, thriving business, then a church for lost souls, then a chop shop for car thieves, and now it's just another abandoned building in various stages of decay. Oh the stories these walls could tell if only they had a voice! But they have no voice. They are silent sentinels that may not be standing much longer. 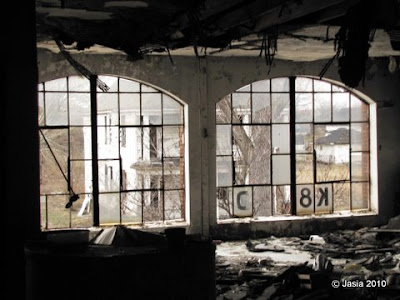 At one time these big, once-beautiful windows looked out on a bustling neighborhood full of houses occupied by recent Polish immigrants who worked from sunup to sundown to get ahead, worshiped in the neighborhood Catholic Church every Sunday and holy day, cared for their children, and struggled to learn a new language and become good citizens of America. They swept their porches and sidewalks daily and when their neighbors were feeling poorly they swept their's too. They had pride and hard work was their way of life. 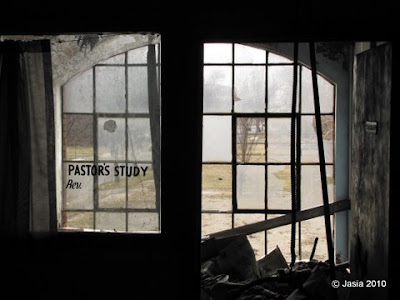 At one time this was the private office of a very successfull businessman. That was before it became a pastor's study. And before it fell into the hands of crooks. Looking at this office, it's very hard to picture those glory days. But they happened. They were real. Now this is. 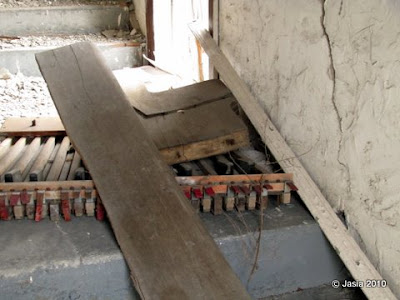 Walking away from this building, this neighborhood, doesn't end the sadness. It says with you and haunts you.

This isn't just any old abandoned building in Detroit. It was originally a modern, successful, baking company owned by my grandparents who contracted with an architect to build this particular section of the building so they could expand their operation. The older section of the facility has been gone (decay? fire? vandalism?) for many years. This is all that's left standing. And I suspect it won't be standing much longer.

I have photos of the baking company in its hey day. And I have a sketch of what it was to become back when my grandfather planned to expand it even more. They were grand plans! This was once a wonderful place full of the smells of freshly baked bread, cinnamon rolls, and pastries. It was all lit up in the wee hours of the morning as my grandfather and his staff prepared their baked goods fresh every day. Even on the coldest of winter nights the ovens kept the place toasty-warm. It was a happy place, a meticulously clean place, a place where neighbors would meet and catch up with each other's lives as they stood in line to buy their bread and baked goods. It provided the most amazing cakes for all the First Holy Communion parties, weddings, birthdays, and graduation parties in the neighborhood. It provided rich desserts, babkas, sweet breads, and paczki, for every holiday dinner table. And when times got tough, during the Great Depression, it provided sustenance to those who could afford nothing more than day-old bread for their dinner table.

But I'll save those photos and stories for another time when I'm not feeling so melancholy. I just couldn't do them justice this day.
Posted by Jasia at 10:22 PM