In Part 1 I told the tale of how the Social Security Application of one John Lipa, someone unknown to me, led to my discovery of the ancestral village of my great grandparents in Poland. I'd call it a lucky find to be sure! 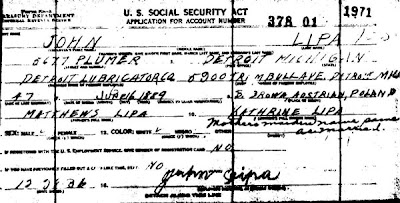 The name on the application, "John Lipa", didn't mean anything to me. I wasn't looking for anyone by that name. My grandfather's name was Szymon Lipa and he died long before the Social Security program was created. Looking at this application, I noticed the address John Lipa gave at the time of this application was from a west-side Detroit Polish neighborhood. His place of employment was on the west-side too. My great grandparents and most of their children lived on the east-side of the city but their daughter, my grandmother Carrie, and her family lived on the west-side. However, Carrie lived no where near John Lipa's address.

Next on the application was John's age and birth date. Age 47, born June 16, 1889 in Bobrowa, Austrian, Poland. I knew from having found my great grandparent's ship manifest that they were from "Austria". They immigrated in 1881 and specific cities/villages were not listed on manifests back then. But I knew at this point that both John Lipa and my Lipa great grandparents were from the same partitioned section of Poland, the Austrian section.

The next bit of information on the application is the name of John's parents, Matthew Lipa and Katherine Lipa. Under Katherine's name it indicates "mother's maiden name same as married". I found that a little odd. Not often you find someone marrying someone else with the same surname. I'd never heard of Matthew or Katherine Lipa so these individuals were also unknown to me.

I got lucky, very lucky! I found my great grandfather as well as my great grandmother in the Bobrowa records and from there I was able to piece together a nice little genealogy. Over time, I was able to fill out that genealogy and I've added more and more to it over the years since my discovery. (I think my discovery of Bobrowa was in 1999. If I could figure out how to find the date I recorded the information in my FTM or Legacy software I could tell you for sure. If anyone knows how to find the date you recorded information in Legacy please let me know!)

So here's the thing. I found John Lipa's birth record in Bobrowa but couldn't connect him to my line of Lipas in Bobrowa. Now Bobrowa is not a big village. And there are many, many Lipas in Bobrowa. I'd go so far as to say that Lipa is either the most common surname or one of the most common surnames in Bobrowa. My theory is that they are all related from a common ancestor named Lipa but I can't prove it. That common ancestor would have lived back before records were kept in Bobrowa. The records start in the late 1700s and from the beginning of those records there are multiple Lipas.

No matter how many times I run the Relationship Calculator in Legacy it comes up the same. There is no relationship between me or my great grandfather and John Lipa.

But we ARE related!

It turns out we're related by marriage not by blood.

John Lipa married Jadwiga "Hattie" Ziobro in Detroit, Michigan on July 17, 1911. I found the marriage record fairly recently (a few months ago) when FamilySearch.org posted the Michigan Marriages 1868-1925 record collection. And it turns out, Jadwiga is my second cousin twice removed. She is my great grandfather Szymon's first cousin once removed. When I saw John and Jadwiga's marriage record I recognized the surname "Ziobro" as one I'd seen before in the Bobrowa records. I looked her up and sure enough, she was born in Bobrowa. Then on a hunch, I ran the Relationship Calculator and BINGO! Jadwiga and I are cousins!

So even though I didn't realize it at the time that I ordered the Social Security application, John Lipa does in fact have a place on my family tree. :-) John and Jadwiga lived in Detroit after they married and had 5 children, a daughter and 4 sons. John died in Dearborn, Michigan (the town I grew up in) in 1969. Jadwiga died there too in 1974.

And just for the record, John's birth date listed on his Social Security application is incorrect. According to the Bobrowa birth and baptismal records he was born on May 13, 1889 not June 16, 1889. But that error didn't matter. All that mattered to me on that application was the town where he was born... Bobrowa, Austria-Poland!
Posted by Jasia at 10:28 PM