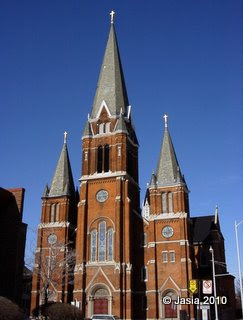 Both St. Josaphat elementary school and high school closed in 1960.

In 1985 there were 100 families registered in this parish.

This parish is still active but it needs help to keep going! For more information on the history, current Mass schedule, and ongoing activities, visit the web site DetroitLatinMass.org.

St Josaphat is one of a few churches in the Metropolitan Detroit area that offers regular Tridentine Masses.

St. Josaphat is a State of Michigan Historical Site.

The following microfilms of St. Josaphat church records are available at the Burton Historical Collection of the Detroit Public Library: Film No.1286
Reel 109: Baptisms 1890-1907
Reel 110: Marriages 1936-1984
Deaths 1915-1984
Confirmations 1915-1958
Reel 111: Marriages 1890-1921
"The St. Josaphat Story begins in 1870 when a handful of Poles decided that a Polish-speaking parish was needed to serve their religious interests. Thus was born St. Albertus Parish. Two years later St. Casimir Parish arose on the west side. The St. Josaphat story now jumps to 1889. The number of Poles in Detroit is so large that St. Albertus is rebuilt but even its large edifice is not large enough for 4,000 families. In June of 1889, Bishop Foley asked Rev. Casimir Rochowski to organize another Polish parish; and as Mr. Zoltowski donated 12 lots on Freemont for the project, the parish began. Building commenced quickly with initial structures soon expanded under the second pastor Rev. Anthony Leks. On October 6, 1889 the cornerstone was blessed and on February 2, 1890 the church itself was blessed. Initial building, however, was not always easy. Father Leks was tormented by debts and resigned his pastorate to be replaced by Rev. Martin Mozejewski. Because of ill health, his tenure was short and the replacement was the young, energetic  and forceful orator Rev. John Rzadkowalski. Under his pastorate the church grew to 1,000 families, a business area grew around the parish, and plans were made for a new church, rectory and janitor's home which would cost some $100,000. (On half of this sum was pledged by all the people immediately). Father Rzadkowalski's inspirational pastorship came to an end after 24 years. After his death, Rev. Lempka became the new pastor. His great contribution was the building of St. Josaphat High School as well as paying off debts, painting the church and installing an iron fence around the grounds.

In 1926 Rev. Maximillian Gannas was assigned to St. Josaphat. He lent his experience in soliciting funds to complete the many repairs of parish property that were deemed necessary. His pastorship came to an end when he was transferred to St. Francis of Assisi. His replacement was one of St. Josaphat's graduates, Rev. Edmund Lukasiewicz.

The new era which seemed destined for St. Josaphat's with the advent of one of its own sons never was to materialize for Father Lukasiewicz died suddenly shortly after assuming his new pastorship. The parish was administered for several months by Rev. Sigismund Osmialowski who was then followed by Rev. Alexander Jarzembowski. His pastorship lasted 20 years. It was largely through his personal efforts that the church was redecorated within and the parish grounds maintained. He was forced to close the schools at the end of the school year in June, 1960. He died on September 28, 1959.

The parish then came under the administration of Rev. Josaph Krasiewicz who in addition to his post at the parish, served as assistant vice-chancellor in the Archdiocese. Among his first acts was the demolition of the school building and its subsequent re-designation as a parking lot. Other improvements followed on all the church property. On January 19, 1962, this energetic and devoted priest was sent to St. Casimir. He was succeeded by the Rev. Francis J. Dolot who devoted himself to one primary goal: make the church area as beautiful as possible. During this time, many parishioners contributed their time and  money in tackling the problems of repair and renovation. The Archdiocese also gave Father permission to spend money for sandblasting, tuckpointing, siliconing, refoofing the church building and other work on the steeples. It was a renaissance for the parish!

In July of 1984, the Rev. Walter A. Markowicz became the pastor. In addition to his other positions, Father is the Directory of Archdiocesan Campus Ministry and Chaplain of Wayne State Medical School.

St. Josaphat has a past that is rich in church as well as human history. It has a record of hard times, troublesome time and exciting times. With the changes brought about in the area by the Medical Center and the new residential housing, the future of St. Josaphat's looks bright and full of new challenge."

Some information from, "The Polish Roman Catholic Churches of Metropolitan Detroit" by PERC. c. 1985. Used with permission from Michael Krolewski, editor.