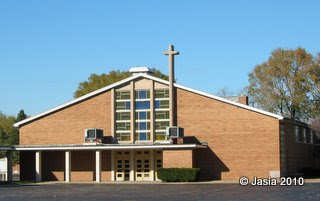 In 1985, the St. Bartholomew Elementary School had 190 students enrolled. The school was run by the Sisters of St. Joseph. The school still operates grades K-8 and their web site is here.

Some information from, "The Polish Roman Catholic Churches of Metropolitan Detroit" by PERC. c. 1985. Used with permission from Michael Krolewski, editor.
Posted by Jasia at 1:27 AM