The Polish Catholic Churches of Detroit, Assumption of the Blessed Virgin Mary 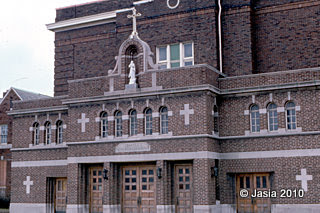 The parish closed in 1989. All the buildings have been torn down.

Over the 50 years of existence of the parish 9213 souls were baptized - recorded in 8 volumes.

The first child to be baptized was Anna Oberman, daughter of Joseph Oberman and Mary Stanislawski, born July 18, 1912 and baptized July 23, the same year, by Rev. C. Dziuk. Sponsors were Anthony Dopkowski and Mary Kapelewski.

5856 people received the Sacrament of Confirmation since the founding of the parish.

The First Sacrament of Confirmation was administered in this parish on July 6, 1913 by the Most Rev. Bishop Edward Kelly.

According to our records, the first Catholic marriage vows took place on April 1, 1913, between Anthony Zielinski and Martha Waszelewski. Rev. C. Dziuk officiated in the presence of T. Drain and Veronica Biernat as witnesses.

In the span of half a century 3002 marriage vows were spoken here.

In the corresponding period 3810 received burial service in this church, 2102 in the last 25 years.

At the age of 77, Valente Markowski was the first to receive burial services at Assumption B.V.M. on February 22, 1913.

The first bell of the church was blessed July 6, 1913 and donated by the St. Joseph Society.

The Assumption B.V.M. School was opened in September, 1913 with 343 pupils. The first Superior was Sister M. Martin.

The first product of the school was William Hausch, the only graduate for 1913.

The first child to enroll in school in 1913 was Venanty Szymanski, now Reverend and now pastor of St. Angela parish.

The Assumption school is conducted by the Ven. Felician Sisters.

During the half century of existence of the parish only three pastors directed the destinies of the parish, namely the Founder, Rev. Constantine Dziuk, from the beginning to December 1919; Rt. Rev. Msgr Adalbert Dadala, from December 1919 to May 1960; and Rev. John Krause, from June 24, 1960 to the present time.

Since June 1915 there were 20 assistant-pastors and two priests in residence.

Father Eugene Mrocka has an appointment in the diocesan matrimonial court.

Misses Puziol and Niebrzydowski are aspirants in the Felician Sisters Academy.
Some information from, "The Polish Roman Catholic Churches of Metropolitan Detroit" by PERC. c. 1985. Used with permission from Michael Krolewski, editor.
Posted by Jasia at 2:12 AM