Karolina Lipa was born in Detroit in 1889. Birth certificates were not mandatory at that time and to date I have found no record of her birth registered with the State of Michigan or any database. However, she was baptized at Sweetest Heart of Mary Church on August 11, 1889 and that record lists her date of birth as August 1st. Her gravestone lists her date of birth as July 20, 1889. So we have 2 conflicting dates for her birth but since the record of her baptism is no doubt the closest to the actual event of her birth, I’m going with August 1, 1889 as Karolina’s birth date.

The baptismal record has her name spelled as “Karolina”, the way it would be spelled in Poland, but all other records I have for her use the American versions of “Caroline” and more commonly “Carrie”. Her Godmother was Karolina Nowak and I suspect she was named for her since it was a common practice in Poland and within this family to name children after their Godparent.

So who was Caroline? She was my grandmother. She was the sixth of eleven children born to Szymon and Ludwika Lipa who immigrated to the U.S. from Poland in 1881. The family home was on Superior Street in what was then a solid east-side-of-Detroit Polish neighborhood. The family attended Sweetest Heart of Mary Church and Caroline attended grade school there as well. Sadly, I have few photos of her and few details of her life.

She married Jozef Laska in 1907, at the age of 17. I strongly suspect that hers was an arranged marriage and that the families knew each other when they lived back in Poland. Jozef immigrated in 1905 and his ancestral village and the Lipa’s ancestral village were only about 35 miles apart. At the time of her marriage, Caroline was working as a cigar maker. I assume that she only attended school through the 8th grade and got a job right after graduation (pre child labor laws). She may well have worked at that job from the time she graduated from grade school until her first child was born nine months after her marriage.

Caroline and her husband Jozef lived with her parents for the first few years after their marriage, as was the custom in the family, so they could save up enough money to buy a home of their own. By the time of the 1910 U.S. Census, Caroline and Jozef had purchased a 2-family home of their own on the west side of Detroit and they would live there the rest of their lives. The family lived on the main floor and rented out the upper flat.

In addition to raising her children and keeping house, Caroline was also a laundress. She would wash other people’s clothing to help support her growing family. By the age of 30, a common age for women to begin their families these days, Caroline had 8 children. She gave birth to her 11th and last child in 1928, one year before the stock market crash that sent the U.S. tumbling into the Great Depression.

I don’t know how the family made it through the years of the depression. It couldn’t have been easy. By 1930, the two oldest boys had moved out of the house. But that still left 9 children at home. Only Annie, then 19, worked outside the home and was able to contribute financial support to the family.

Caroline kept in contact with her sisters that lived on the east side of the city. Occasionally she attended a communion or graduation party but family members say she “had a rough life” with her husband and he often forbid her from attending family get-togethers.

Caroline died of a heart attack on September 10, 1940 at the age of 51. She was buried at Holy Cross Cemetery in Detroit. At the time of her death, she had 6 daughters, 5 sons, and 4 grandsons. After her death, she would have 7 more grandsons and 9 granddaughters.

It seems like I should be able to tell you more about my grandmother but I can’t. I don’t know what her favorite color was or if she liked to sing. I don’t know if she was a good cook or had a fear of thunderstorms. I don’t know what her dreams were or what she thought of all the new technology of her day (electric lights inside the house, indoor plumbing, radio, etc.). I have very few photographs of her, below are the three best... A portrait of Caroline, age 16, as a bridesmaid; Caroline and Jozef’s wedding photograph, age 17; and a photo of Caroline with her 3 youngest children in 1939 at the age of 50. I’m told the last photograph was taken on a day trip to the Irish Hills of Michigan. 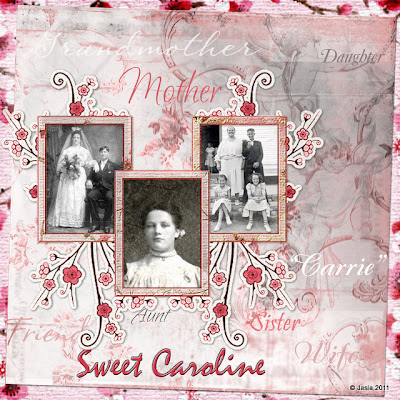 I think of my Grandma Carrie (In my mind that’s what I call her) from time to time and wonder if I would have liked her. I wonder too if she learned to speak the English language in grade school and if I would have been able to have a conversation with her if she’d lived longer or I’d been born earlier. The family only spoke Polish at home. So many questions, not enough answers...

Rest in peace, Grandma Carrie. I honor you with this remembrance for Women's History Month.
Posted by Jasia at 3:54 PM