The Founders
My grandfather, Wincenty Lisowski, immigrated to the U.S. from Poland in 1912. Something about his life, pre-immigration, was upsetting to him and for that reason he never talked about life back in "the old country". He wasn't a young man when he came to America. At age 28, he was certainly old enough to have had some kind of job before he left Poland but no one in the family knows what that might have been.

The Lisowski family members were peasant farmers and they did own their own land. Wincenty was the oldest son and by tradition should have and would have inherited the family farm. But he didn't. Or perhaps he did but didn't want it. Just a few months after his father died, he left Poland for the land of the free and the home of the brave and made his new home in the then bustling city of Detroit, Michigan.

Once in Michigan, Wincenty worked at a couple different places. He is known to have worked at the Michigan Milling and Beverage Company on Military Avenue in Detroit and for an "auto plant" prior to 1916. In January 1916 Wincenty married Zofia Mizera, also an immigrant from Poland, who was working as a seamstress.

Wincenty had a friend, Feliks Jaruga, who was also from Poland. Feliks immigrated in 1913 and was a baker by trade.  In February 1917, Wincenty and Feliks went into business together buying a bakery owned by Louis Robakiewicz and his son Stanley. It was just a small, two-story frame building located on the corner of 30th and Herbert Streets  in their west-side Polish neighborhood. A short time after Wincenty and Zofia's first child was born, the family moved into the apartment above the bakery and Wincenty and Feliks' entrepreneurship began with their new enterprise, the Polonia Baking Company (PBC).

Setting Up Business
Wincenty must have learned the baking business from Feliks because I can find no evidence of him working in the baking trade before he and Feliks established the PBC. He would come to learn that owning and running a bakery wasn't an easy life, especially after Feliks wanted out of the business less than a year after they started it.

The PBC operated 6 days a week. Wincenty's only day off was Saturdays. The rest of the time he arose in the early hours of the night and made his way to the kitchen to begin the process of making the dough for the fresh bread and pastries that they would begin selling in the store front at 7am. After she fed and clothed their infant daughter, Zofia would come downstairs and run the front counter while Wincenty and Feliks worked their magic back in the kitchen.

Before long (just a few months), Feliks wanted out of the baking business. He'd met a nice girl who lived on the east side of town and he wanted to marry her. But she didn't want to move away from her family to the west side of town. I'm not sure if Wincenty and Feliks' parting was amiable or not but I believe it was. Bad business relations tend to be the kind of thing that gets whispered about among family members in the retelling of the "old days" but I never heard about any ill will towards Feliks.  In any event, Wincenty bought out Feliks' share of the business and he became President and Zofia became the secretary-treasurer of the PBC. Feliks married in April 1918, just over a year from the time he and Wincenty went into business together. By then he was working as a machinist, presumably somewhere on the east side of Detroit. Before the year was out, Feliks and his bride would have a daughter of their own.

Expanding the Business and Family
Meanwhile, Wincenty had big ideas for his little bakery. Business was going well enough that in 1919 he hired an architectural firm to draw up plans for expansion. And they were pretty ambitious plans! He bought out the two houses next door to the bakery and began construction of a substantial two-story brick addition with hopes of eventually buying more land and expanding even more. The new addition was completed in 1920 and the PBC business grew and grew. So did Wincenty's family.

Another daughter was born to Wincenty and Zofia in 1918 (My mom, Lucyna, was born in the apartment above the bakery.) In 1920, two of Zofia's sisters immigrated to the U.S. and came to live with them also. And in early 1921 Zofia gave birth to a son. In 1919 the family moved out of the bakery apartment to a small home kitty corner from the bakery. In 1920 they moved again to a larger home 4 doors down 30th Street from the bakery. Whew! What an exciting time that must have been for the Lisowski family... expanding their business, their family, and their residence in the span of just 3 years! Life was good for this immigrant family.

Sadly, it wasn't so good for Wincenty's friend and former business partner. Feliks was killed in May 1920, hit by a train while trying to outrun it in his car. Feliks' brother, Maryan, was also in the car at the time but he survived the accident. He married Feliks' widow and raised their daughter as his own. Maryan owned a music store and sold musical instruments and sheet music.

The "Roaring Twenties" were a time of robust business in Detroit, Michigan, and throughout the U.S. Wincenty hired more and more employees, mostly family members, neighbors, and friends, until he had 30+ people working for him. He bought 7 delivery vans so that he could deliver his baked goods to neighborhood grocery stores throughout Detroit, Hamtramck, and the Delray areas. He was a well known businessman in the west-side Polish community and the family had a prosperous life.

And then came the stock market crash of 1929.

And the Great Depression.

The Difficult Years
The Depression years were difficult for the PBC. People had no money. Those who were employed could afford fresh bread (at $.10 a loaf) but most people stood in long lines for day-old bread (at $.05 a loaf). Very few people had money for pastries or cakes, not even for special occasions. Wincenty struggled to keep the bakery going but it wasn't easy.

By 1934-1935 Wincenty knew he had to do something. He didn't want to let any of his employees go because they were almost all his family members, neighbors, and friends. He came up with the idea to have half the employees work the first 3 days of the week and the other half work the other 3 days of the week that the bakery was open. That way no one would be jobless. Unfortunately, the employees didn't like his idea.

The disenchanted employees of the PBC demanded full-time employment and when Wincenty told them he couldn't keep them on full-time they organized and joined a local union. Compared to some of the violent union activities at the time, the discontent aimed at the PBC was relatively mild. But it was enough to put it out of business. Some union sympathizers released smoke bombs in the back of the delivery vans when the drivers were unloading baked goods. Police reports were made but there was little that could be done to repair the damage or prevent further incidents. The stinky smoke filled the vans and no amount of cleaning would remove it. No baked goods could be transported in the vans without also taking on the stinky smell. The financial loss of the vans was more than the business could handle.

In 1935-36, Wincenty and Zofia sold the bakery to a Greek family. They weren't in business long before they closed up shop as well.

Looking Back
The PBC had a substantial impact on my grandparent's lives as well as the lives of their children, extended family members, their neighbors and community. It was the focus of Wincenty and Zofia's world for the 20 years they owned it. It provided a very good standard of living for most of those years and I believe they would have been labeled a success by their family back in Poland as well as their fellow immigrants to this great nation. A lot of hard work, long hours, and prayer went into their success. I greatly admire their determination and dedication.

As is often the case with family history, I still have many questions. Where did Wincenty, Zofia, and Feliks come up with money to buy the small bakery in the first place? Did Feliks' widow regret her husband selling out his share of the bakery and moving to the east side of the city to be with her? Are there any records of incorporation or solvency available on the bakery and if so, where? Why didn't Wincenty go forward with his grand plans to expand the bakery? Were my grandparents and the bakery employees on speaking terms when he sold the bakery or were the employees too bitter at that point?

A hundred times or more I have imagined the scent and taste of the Polish rye bread my grandfather was famous for. I've daydreamed about the pastries, cakes, babkas, cheesecakes, cinnamon rolls, egg bread, chrusciki, poppy seed and nut rolls I know they made there. No doubt about where I got my sweet tooth! 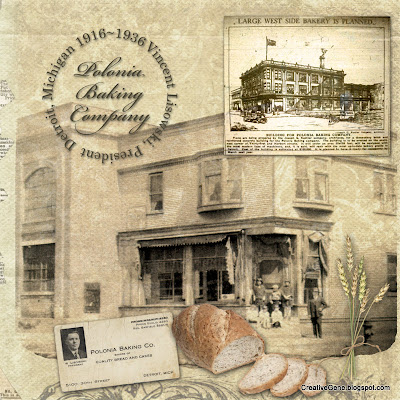 Pictured above, my grandfather stands on the sidewalk outside his bakery. You can see the bay windows of the apartment upstairs where my mother was born. On the left side of the image you can see part of the brick addition Wincenty added after buying the two houses next door to the bakery. I wish I had more old photos of the bakery. There are never enough old photos!!!