I'm in a bit of a quandary. I want to write up a story about home and hearth for the next edition of the Carnival of Genealogy but I'm finding myself a bit challenged on that subject.

The house I grew up in was a very small aluminum sided bungalow on a suburban street of identical aluminum sided bungalows. It wasn't haunted or pretty. It wasn't old or new. It wasn't added on to, nor did it have bragable landscaping. I would really have to spin some yarn to make an interesting story about it. The only exceptional thing that happen to that house is the fire of 1958 or '59. And I can't really blog about that since the people involved are still living and probably wouldn't appreciate me telling the tale.

My next thought was my aunts' and uncles' houses. But there's not much to tell there either. They all (yes, every one of them) bought little houses in the western Wayne County suburbs, some brick, some aluminum, some bungalows, some ranches, all nondescript. Even my cousins... I can't think of a one that bought an old house to restore that might have some kind of story behind it. There are no cottages on the lake in the family, or hunting cabins up north. I do have a second cousin that grew up on a farm, I even have picture of it, but I've never been there so I have no memories to share.

But I'll be darned if I'm going to miss out on the Carnival of Genealogy just because I have no stories to tell about a house!

So here's a picture of my maternal grandparents' bakery (taken in the mid 1920s). There were apartments upstairs and that's where my grandparents lived for a few years. My grandparents were married in January of 1916. They bought an existing bakery at the corner of 30th and Herbert streets in Detroit later that same year, and named it Polonia Baking Company. My grandmother gave birth to their first child, a daughter Helen, in February 1917. The following month they moved into the apartments above the bakery. My mother was actually born in these apartments in July of 1918. In 1920, my grandparents paid the passage for two of my grandmother's sisters to come to America. Knowing they wouldn't all fit in the small apartments they bought a small house on the same street, 3 houses south from the bakery. My grandmother gave birth to a son, Sigmund, in April of 1921 and that house became too small. So then they bought a little bigger house, 6 houses north of the bakery. And they lived there the rest of their lives. 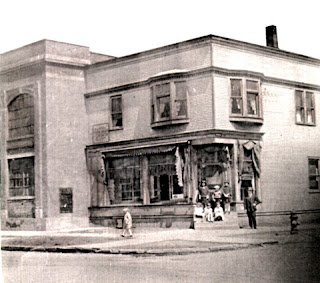 When they bought the bakery, it was only the small wooden section on the right. In 1918 they commissioned an architect to draw up plans to enlarge the bakery and make it a baking company. A sketch of the proposed building appeared in a Detroit newspaper. 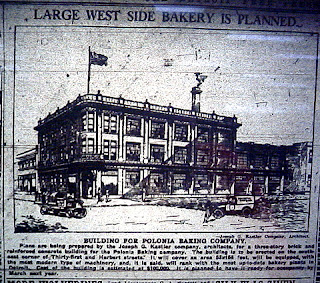 My grandparents bought the two houses north of the bakery to build on the addition (so then they lived only 4 houses north of the bakery ;-). It was completed in 1919, I believe. They never did redo the front of the wooden section of the bakery as depicted in the sketch. They obviously had big dreams for the bakery. It did become one of the largest in metro Detroit for it's time but didn't become the building pictured. I don't know why they didn't build on and expand but for some reason they opened a second location on nearby Michigan Avenue instead. That became their business office.

My grandparents sold the bakery in 1936. The people who bought it also used it as a bakery but they went out of business in just a few years. I don't know the history of the bakery after that. I heard a story that it was used as a "chop shop"... someone in the family claims they heard it on the news but I've never been able to confirm it. More recently it was a store front church. It's been abandoned now for at least 5 years, probably more. Here's a recent picture of it. I don't know what happened to the wooden store front section that was on the corner. If you look very closely to the far left side of the picture you'll see a pickup truck and a boat. They are sitting on the lot where my grandparents' house stood. 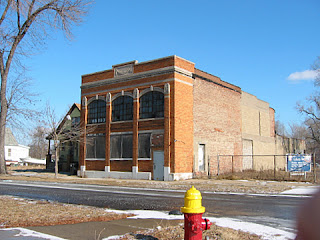 The once-thriving west side Polish neighborhood where my grandparents lived and worked is now a very run down, dangerous section of the city. There are no Polish people living there any more. Street gangs rule. Crime is rampant. Lots of abandoned homes and vacant lots. It's very sad.

So, is there a story about a house in your family? Only 3 more days until the deadline for submissions for the next Carnival of Genealogy. Submit your blog article here. What are you waiting for?
Posted by Jasia at 8:10 PM