A Common Thread of Creativity in My Family

There's a tie that binds the women in my family, and that tie is made of thread. We're talking needle and thread here. It seems that my maternal line of ancestors knew what to do with a needle and thread. My maternal grandmother, Sophia, immigrated to the U.S.A. from Poland in 1913. She was 19 years old at the time and was a skilled seamstress. She told her children that she was recruited by a representative from the U.S. who was looking for skilled and experienced seamstresses. According to her ship manifest she paid her own passage but it is possible that she was reimbursed by the company once she got to Detroit. I don't know which clothier she worked for in the Detroit/Hamtramck area but I believe it was located on Chene Street.

Sophia most likely learned her needlecraft from her mother. That's usually the way those things went in the rural villages in Poland. Skills were passed down from generation to generation. Sophie's sister Helen was also a skilled seamstress. She too worked as a seamstress when she immigrated to the U.S.A. in 1920.
Sophia, the bride, in the wedding dress she made (1916). She made her bridesmaid's dress too.
My mother, Lucy, told me many times of her mother's sewing, knitting and crocheting skills. Sophie not only made all of her own clothing, but she made all of her children's clothing too. As a child, my mother and her sister hated having "homemade" clothes even though they were complimented on their dresses everywhere they went. The first "store-bought" dresses mom and her sister owned were their First Holy Communion dresses which they begged and pleaded with their father to get.

Sophia designed and sewed her children's clothing. My mom, Lucy, is on the left (1922).
My mom and her sister both told me many times over the years how their mother would see a dress in a store display window and ask them if they liked it. If they said "yes", rather than buying it for them she would buy fabric and make them one just like it... no pre-made patterns used, she could just measure, cut, and sew from memory and make up a dress just like that. Of course she made many dresses of her own design as well. And she sewed all the clothing for their younger brother too. Additionally, she crocheted doilies and dresser scarves and such for her home. 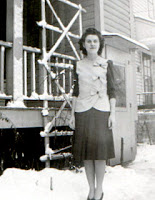 Here's my mom modeling a dress her mother designed and made for her (1943).
My grandmother made clothes for my mother throughout her school years and even afterwards when she was a single working girl. Mom came to appreciate her mother's talents and reveled in the compliments she received when wearing dresses her mother made for her. She never took an interest in learning to sew herself until after her mother died and she inherited her sewing machine. Then she bought some simple patterns and taught herself to sew. She made some nice things both for herself as well as for me. And she made curtains for the house. I think she liked sewing curtains the best because she could look at her work and appreciate it every day. After my father died, my mother took up crocheting and made me a bedspread among other things. 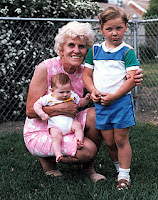 Here's my mom in a dress she made for herself (1985).
Mom encouraged me to take a sewing class when I was in school, so I did. And I found that I really liked it. I liked choosing patterns and fabrics and sewing my own clothing. It came in handy too, especially when I was in high school and going to lots of dances. I'm pretty tall for a girl (5'9") and finding clothing long enough for me was hard to do. I couldn't just order tall-sized clothing online like I do these days. I spent a good deal of my high school years sewing my own clothing and my mom always encouraged me. 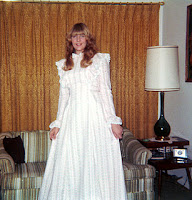 Here I am in a dress I made, going to the Sponge Dance (Sadie Hawkins) in March 1973.
The story doesn't end there. I found myself sewing clothing for my daughter too. I didn't sew all of her clothes but I did make a few things for her here and there. And I made several Halloween costumes for my kids as well. I also made some curtains for my house too. Over the years I also learned knitting, crocheting, candlewicking, embroidery, counted cross stitch, and rug hooking.

Here's my daughter in her First Communion dress, which I made for her (1993).

The last time I sewed something for myself was back in 1996, so it's been a while. And if you're wondering about my daughter, well, she too took a sewing class in school. She hasn't made much of anything for herself yet but last Christmas she did hint that she'd like a sewing machine. She didn't get one, but by this next Christmas she'll have one ;-) And hopefully sometime in the not-too-distant future I'll be sewing for my grandchildren...
Posted by Jasia at 7:51 PM