The Airing of Our Polish Story 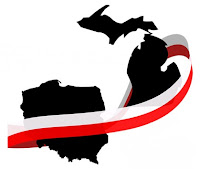 This coming Saturday, June 16th, Channel 7 (WXYZ Detroit) will air Keith Famie's long awaited documentary on the Polish communities of metro Detroit. The one-hour documentary, Our Polish Story, will be shown commercial free. If you have Polish ancestors or family in Michigan you won't want to miss this show.

I have previously written about this production and it has attracted a great deal of interest throughout Detroit's Polonia. Virtually all of the major ethnic Polish institutions in and around the city are involved in sponsoring this documentary. I urge you to show your support by watching the show at 7pm on June 16th and patronizing the establishments that have helped to make it possible. (No, I'm not a corporate sponsor.) Parts of the documentary were filmed at Sweetest Heart of Mary and St. Albertus Catholic churches.

Previous posts on this topic:
The Making of Our Polish Story
Posted by Jasia at 10:57 AM