I had a fun time at the Janet Evanovich book signing last night, but I sure was glad to sit down when it was over. The folks at the book store gave out over 1,000 wristbands to those who wanted books signed so you can imagine the crowd there. It was a fun crowd though and we sure didn't lack for things to talk about. I know the quality of the picture in my last post was poor but I was doing a remote blog entry from my cell phone and it doesn't have the best camera in it.

Janet was super sweet and took a moment to say a few words and take pictures with everyone in line. I was so happy to meet her. She has brought me so much laughter over the years I felt I owed it to her to say thank you. Those of you who read Janet's Plum series of novels know what I mean. Craig is a fan, Miriam is fast becoming one, and Randy is tempted to try (go for it Randy!). These books aren't thought provoking or intense in any way. They are first and foremost short, fun reads with zany characters, good plots, and some sizzle. You don't need to read them in sequential order but there are a few references to previous events in most of the books.

Janet's daughter Alex was also at the book signing and I had a chance to meet her. She's very friendly and runs the evanovich.com web site (here's a scoop for you... there's a new web site coming in July).

While Janet was signing my books, Chris' photographer happened by and took our picture... 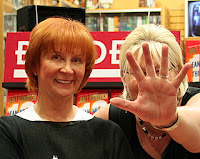 I wrote a review of Lean Mean Thirteen on the Amazon.com web site under the moniker "blue4you" but DON'T READ IT UNTIL YOU'VE READ THE BOOK because it has "spoilers" in it. And one last thing before I move on to other topics... Craig, wait till you see what Lula gets going in 13! (Craig and I share a true appreciation for Lula.)

So, on to today. Today I went shopping. I bought a new laptop this morning and a new truck this afternoon. The laptop is super sweet with a built in web cam, fingerprint recognition technology, dual processors, burns CDs and DVDs (LightScribe), running Windows Vista. And it's got a nice big hard drive (160 GB :-) It's got one of those cool screens that rotates and it's even got a remote control. What a great new toy... I mean tool for genealogy, and working on web sites ;-)! (You do remember that recent post about my personality and how I like "new", right?)

And then... I bought a new truck. And it's sa-weeet too. And now I just want to go driving around in it and inhale that new car smell ;-) ... and play some tunes with the sun roof open and feel that summer breeze a blowin'... ahhh, it's a good day!

I won't be participating in the ScanFest tomorrow because I have a bridal shower to go to but I'll be thinking about scanning all the while I'm driving there and back ;-)