I do remember my mother telling me that when she and my dad got engaged they had to make a trip across town to visit his godmother to personally invite her to their wedding. I don't believe they invited any of the other guests in person though. Their wedding was an all day affair (January, 1944). It didn't happen in the traditional order of events described previously. The church ceremony took place at 11:00 am followed by a "breakfast" at her parents' house. All the wedding guests who attended the church ceremony also came to breakfast. In the afternoon the bridal party went to a photographer's studio for the formal wedding portraits. And then a formal reception with dinner, music, and dancing was held in the evening at a nearby hall. The following day, poprawiny (which means something like, "do it again") was held at her parents' home. That would have been considered day two of their wedding celebration.

I was quite surprised to learn about the wedding bread when I was doing my research on polish wedding customs. My mother never spoke of this tradition and given that her father owned a bakery that was known for its rye bread I would have thought this would have been a tradition passed down in her family. I don't remember any mention of wedding bread at my cousins' weddings either. Perhaps the tiered wedding cake was an American substitution for the elaborate wedding bread in days of old in Poland. 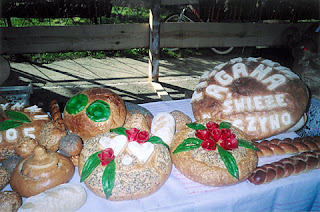 I'm quite sure my mother did not have a capping ceremony at her wedding reception. This may have been a tradition that survived history in Poland but I don't think it traveled across the ocean with my grandparents. I have my grandparents' wedding photo and another photo taken shortly afterwards but it doesn't look like my grandmother's hair is any shorter in the later photo. In both photos her hair looks like it's pulled back into a chignon so I can't tell for sure.

by Sophie Sophie Hodorowicz Knab, and The Peasants by Wladyslaw Reymont. These were the sources I used for the information presented in this series of articles. Sophie's book goes into a great deal more detail than what I was able to include here. A good read!