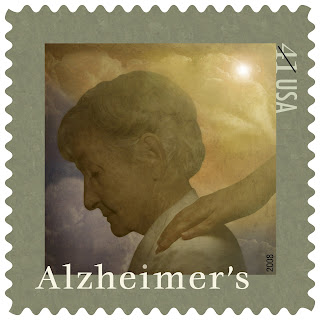 You know how people are compelled to look at a traffic accident? It's almost like a magnet that draws our attention. We both do and don't want to look at the same time. We know what we see won't be pretty but we find ourselves glancing over just the same.

That's the same sort of situation I find myself in with regards to Alzheimer's Disease. When I read about it I am both frightened and saddened by it. But I can't help going back to read about either. It draws me in, upsets me, and leaves me feeling down. But I go back to read again the next day.

I am one part fascinated by the disease and one part horrified by it. I wonder what my mom was going through and how much she was aware of. We never had a direct conversation with her where we said "Mom, you have Alzheimer's". In our family, ugliness and upsetting things were never talked about directly. All those times, over the years, when my dad beat my mom... we never talked about it. It was just smoothed over as much as possible and we just moved on. It was our family behavior pattern to not deal directly with problems. So when my mom began exhibiting the symptoms of Alzheimer's we never talked about it with her. We took her to the doctor, she was diagnosed with "dementia", and we just took it in stride. To my knowledge, the doctor never told her directly either.

My mom was very good at covering up her memory loss. She found so many ways to avoid saying "I don't remember" or "I don't know". The fact that she did so always struck me as evidence that she was aware of her memory loss and was embarrassed by it. After my mom died my brother told me that when he was going through her things he found little notes she'd written saying things like, "I can't remember my children's names". They weren't dated and they weren't expanded upon, so they don't tell us much. But they do suggest that she was aware of her declining mental state.

My mom's sister, Helen, went through the early to moderate stages of Alzheimer's Disease before she died in 2001. I don't remember Aunt Helen forgetting people's names or not recognizing them. She may have experienced a bit of that but she died before her dementia progressed to the stage where that was common. Still, we all witnessed a dramatic change in her personality and her mind definitely twisted her thoughts in bizarre ways. So my mom may have realized that she was suffering the same fate. I wonder if it frightened her to think that it was happening to her the way it frightens me to think it may happen to me. It's terrifying.

This week's news... "People who have a mother with Alzheimer’s disease appear to be at higher risk for getting the disease than those individuals whose fathers are afflicted, according to a new study by NYU School of Medicine researchers." Not a very comforting thought.

The United States Postal Service has announced that it is issuing a stamp next year to help raise awareness about Alzheimer’s disease as part of its Social Awareness stamp series (pictured above). This month, November, is National Alzheimer's Disease Awareness Month. It's a good time to learn about this devastating disease. A good place to start is the Alzheimer's Association web site.

Do you know someone with Alzheimer's disease? Do you worry about getting it yourself?
Posted by Jasia at 2:43 PM